This George Osborne conference speech at the Conservative Party conference in Birmingham yesterday caught the headlines for its proposed abolition of universal child benefit. And no doubt those headlines will continue for some time. 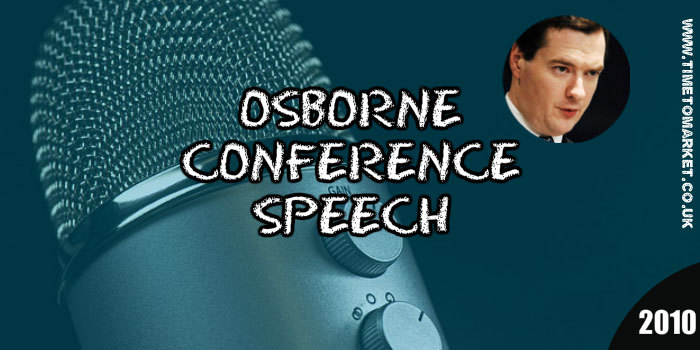 “Conference, I come with good news and bad news.

The good news is that we are in government after 13 years of a disastrous Labour administration that brought our country to the brink of bankruptcy.

We are in government after 13 years of a disastrous Labour administration that brought our country to the brink of bankruptcy.”

His autocue delivery left something to be desired. But he managed it. In fact there were several stumbles and fumbles as the Chancellor tried to get his words out. But he kept going—he wasn’t thrown.

His conference speech made good use of the conference theme, “Together in the national interest.” So, he referenced it four times in this 30 minute speech, often at telling points, particularly in his conclusion.

Knowing the serious points that he had to get across in his first speech as Chancellor of the Exchequer didn’t stop George Osborne from trying humour in the speech. There was humour and it was typically directed at the former Government. In this case the Miliband brothers.

“Vince Cable and I will do this together.

People said we wouldn’t get on, that we’d trade cruel nicknames, that we would knife each other in the back, that we’d try to end each others’ careers .

Who do they think we are? Brothers?”

“And when it comes to the next election, we will say to the British people: don’t give the keys back to the people who crashed the car.”

References to Ed Miliband abounded and pointed to the late editing of this speech:

“That’s what’s on offer from Labour and my generation won’t stand for it.”

This was clearly a reference to the Ed Miliband new generation speech. And then there was the running joke that now seems to get into every party political speech:

“So they failed to fix the roof when the sun was shining.

And left this country defenceless when the storms came.”

This particular line was enlivened with the subsequent weather metaphor…but it’s getting a bit stale, now.

This George Osborne conference speech didn’t have the rolling gait of an old-time political classic. But it contained key messages for his audience, useful rhetorical devices and some clever jokes at his predecessors expense.

One of his best rhetorical devices was the extended not this, but that clause near the end of the speech:

“We don’t choose the times we live in.

Not for us, the easy years of plenty.

Not for us, the times of quiet management.

That’s not the canvas upon which my generation has been asked to paint.

He worked this one well and it certainly allowed him to get to his conclusion:

“A Britain that is a beacon for liberty and justice.

There may be moments when we can’t see it.

When it seems just out of reach.

But it is always there, calling us to our task.

The task of this generation.

The task of the British people.

Together in the national interest.”

At half an hour this was a perfectly timed speech from the Chancellor. He’s certainly becoming more assured in his delivery as he builds his public speaking experience. And, certainly the Wikileaks story of no conference speech for Osborne is very much passé.

You can discover plenty of public speaking tips with our regular series of posts, podcasts and videos. For example, you can discover how to engage with your audience when you use a theme for your speech. And, when you are ready to boost your public speaking skills even further, then why not plan for training or coaching. We can train or coach you at more than 40 different training centres in the UK. Or, we can run a corporate course for you and your team at your own offices. So, when the time is right, please don’t hesitate to call.