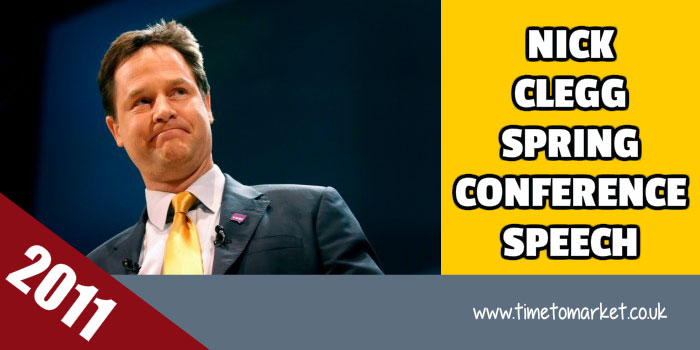 The beginning of his speech was notable, with a mixture of personal anecdote and a reference to a party member:

But it was a passing remark from one delegate that took me most by surprise.

‘It’s so nice to see you back’ she said. ‘I thought we’d lost you when you walked through that door of Number 10’

So, that story then allowed Mr Clegg to set out his position for his speech.

The Spring conference had a theme and he referred to the theme consistently throughout his speech:

The slogan at this conference says: In government, on your side.

In government. On your side.

We noted his public speaking rhetoric a few years ago. So, it was no surprise when he used rhetorical questions in the speech with purpose. Since they helped him to explain more fully:

Some people have asked me: whose side, exactly?

My answer is simple…

He then followed this with a multi-part list involving:

His conference speech featured historical associations with the substantial legacies of David Lloyd George’s People’s Budget, William Beveridge’s welfare state blueprint and JM Keynes’ economic planning. This is such a useful technique when people need reminding of the direction of travel.

A not this but that statement in the speech made clear the Liberal tradition:

We’re not the heirs to Thatcher.

We’re not the heirs to Blair.

We are the heirs to Mill, Lloyd George, Keynes, Beveridge, Grimond.

This wasn’t an elegant speech. His speech writer is writing speeches that could equally be given by George Osborne and David Cameron. Swap Liberal for Tory, of course. Just like George and David, he likes lists, short sentences and the passive tense:

It has meant making difficult choices.

But at least they have been our choices…

Not forced on us by the bond markets as they have been in Greece and Ireland.

But he soldiered on with a decent stab at a phrase reversal, another politicians favourite:

This line was not dissimilar to that of Tony Blair’s Labour party conference speech in 2001:

Another politicians favourite was the position taker, which we can expect in such a campaigning speech:

They say they would cut but they won’t tell us where.

We want to say: we’ve done what needed to be done.

Here’s a conference speaker who loves the combination of listing and repetition:

If you want more duck houses: vote no.

So we have seven weeks to get our message across:

If you want MPs to work harder for your vote, vote yes.

If you want politicians to listen to whole country, not just swing voters in marginal seats: vote yes.

If you want an end to jobs for life in safe seats, vote yes.

If you want a new politics, vote yes.

He can poke fun at himself. There was a moment of humour with the line:

As for the banks, I agree with Mervyn King.

Another reference back to the “I agree with Nick” comment from the televised Leaders Debates of the 2010 campaign. If the line sounded familiar, it was. Much of this speech was re-used from his Scottish Liberal Democrats Spring conference the previous week in Perth.

One line suggested a hint at youth speak or, perhaps, the tender years of his speech writer:

Would a government without Liberal Democrats have cut taxes for the poorest?

I don’t think so.

Having mentioned Shirley Williams three times and David Owen once (not flattering, however), he gave another hint of an earlier speech with his final words:

Tell them how we are working to build a liberal Britain:

We are in government.

That was more than an update of David Steel’s Liberal assembly speech in 1981:

go back to your constituencies and prepare for government.

A good way to conclude given the small matter of the Barnsley by-election result.

If you have plans for a Spring conference speech, or indeed any conference speech, you can always consider a PresentPerfectTM course. You can join a scheduled public course. Or, as an alternative, why not arrange a one-to-one coaching session for yourself. We can even train you in your own office if that helps. Please don’t hesitate to ask.