We can now expect a Brexit speech just about every day or so. Unfortunately, most of these speeches are either dull or lack imagination. So, you can imagine our surprise when we came across the Taoiseach speech in Belfast today. Yes, it's full of some plain truths. But it does contain some ideas. Some suggestions. So, at last some innovation from a politician. But will anyone listen? 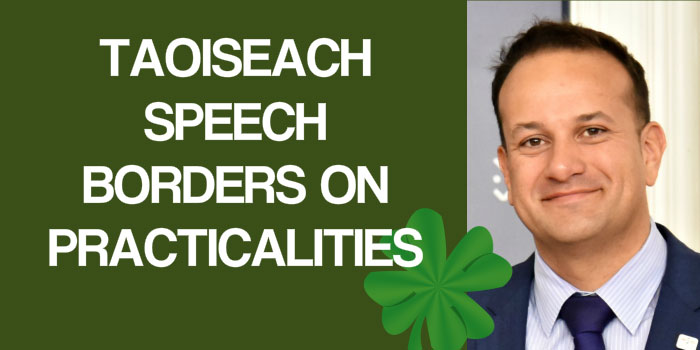 Taoiseach Speech Borders On The Brexit Practicalities For Ireland

The Taoiseach is on his first official visit to Northern Ireland. And he chose Queen's University, Belfast to deliver his Taoiseach speech on the future of relationships between Northern Ireland and the Republic.

Introduction To The Taoiseach Speech

He started well with a beginning that combined a historical perspective with an ongoing viewpoint. How ironic that he also referenced a motto from an earlier European empire.

Since its foundation in the mid-nineteenth century, Queen’s University Belfast has answered the question posed by its Latin motto. There has never been any doubt about what it gives back, through its teaching, through its scholarship, through its contribution to public life. It continues to give, educating and inspiring new generations every year.

It's fair to say that his introduction did go on a bit. There was a lot of it. But, eventually we got to 1979, the year of his birth.

It was when the Pope famously came to Ireland, but couldn’t travel north, and had to make his plea for peace from south of the border.

At last we had got to the border. We knew that he would reach it eventually. However, this was an important juncture. Not least because he could show, for his audience, how things have changed over 38 years.

The border itself was a very different place, a place of bloodshed and violence, of checkpoints.

A barrier to trade, prosperity and peace.

And, of course he then showed how different things are today. Once the Taoiseach had established the deep changes that we have already seen, he then got on to the matters of identity. Here, of course he could use contrasts to great effect.

He believed that we all have multiple identities, it's what makes us what we are.

This is a strength, not a weakness; an opportunity, not a threat.

It is at the very heart of the Good Friday Agreement - the right of the people of Northern Ireland to be British, or Irish, or both.

And, of course, the right to be European.

And of course, he then moved on to his primary purpose. Potential solutions for th border that can work in the context of Ireland. Not really anything to fear.

For example, if the United Kingdom does not want to stay in the Customs Union, perhaps there can be an EU-UK customs union.

Conclusion To The Taoiseach Speech

The Taoiseach speech led to a rousing conclusion with, once again, the central theme of unity.

Written shortly before he died, Willie Redmond said that: ‘It would be a fine memorial to the men who have died if we could over their graves build up a bridge between the north and south.’

I believe we should all honour his words today.

At a time when Brexit threatens to drive a wedge between north and south we need to build more bridges and fewer borders.

I promise I will play my part in helping to do exactly that.

This was a solid conclusion to a rousing yet practical speech. On his first official trip to Ulster this was good stuff from the Taoiseach. And how good it is to report on something other than a predecessor's lifted speech controversy.