Seventy years ago Winston Churchill was six weeks into his Premiership. And in that brief period he had weathered some major Allied forces disasters. However, the successful evacuation of 335,000 troops and equipment from Dunkirk appeared to steel the Prime Minister further. But then, events in France, the collapse of Paris to German forces and the replacement of the French Prime Minister on June 17th 1940, required Churchill to steel the country. So, this Winston Churchill speech on the 18th June 1940 aimed to do just that. Steel the country. And, of course provide the required will and determination to fight on. 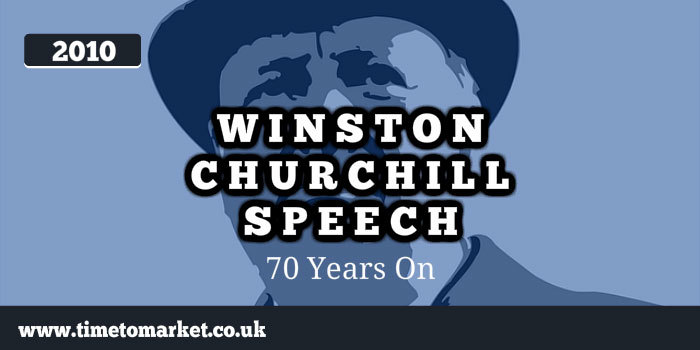 In his speech he gave a thorough assessment of the invidious position of the British, their allies, Dominion and Commonwealth forces. He highlighted strengths in equal measure to the known weaknesses. In the circumstances, he gave a thorough analysis…tinged with some humour:

“It would not be a good idea for me to go into details of this. It might suggest ideas to other people which they have not thought of, and they would not be likely to give us any of their ideas in exchange.”

That spirit of defiant humour pervaded much of the Winston Churchill speech. A speech, of course, that he gave first in the House of Commons and then on the BBC :

“We are also told that the Italian Navy is to come out and gain sea superiority in these waters…I shall only say that we shall be delighted to offer Signor Mussolini a free and safeguarded passage through the Strait of Gibraltar in order that he may play the part to which he aspires.”

The speech gave Churchill the opportunity to note the tough times ahead. Thus, he left the country in no doubt:

“The enemy is crafty and there is no dirty trick he will not do.”

But the speech also provided a vision for the future; goals to which the people should struggle:

“If we can stand up to him (Hitler), all Europe may be free and the life of the World may move forward into broad, sunlit uplands…

Let us therefore brace ourselves to our duties, and so bear ourselves that, if the British empire and its Commonwealth last for a thousand years, men will still say, ‘This was their finest hour.'”

And, so we remember this Winston Churchill speech. Because he gave the vision and leadership during the crisis. And, of course because he introduced the term, ‘the Battle of Britain‘.

You can, of course, read plenty of tips for public speaking with our regular series of public speaking tips, podcasts and training videos. And, when you are ready to give your public speaking skills a real boost, then please don’t hesitate to get in touch. Because, with the right training or coaching, you can always give an assured speech at the right time.