A Double Helix presentation by the independent game studio has led to a major discovery. In keeping with their name they’ve found out that their EVO 2013 presentation audience can have double stranded streams of appreciation for a conference presentation. Some bits they like and some they don’t. 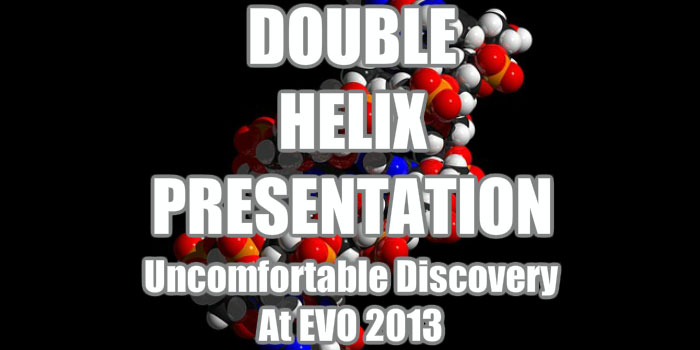 The two-man tag team from Double Helix made this major new discovery soon after they started their presentation at the fighting game tournament–EVO 2013.

The double act intended to present their new game, Killer Instinct, to an audience of gamers and gaming professionals. So, in keeping, the presentation team did their utter best to appear casual…if not cool. Their build isn’t that of cage fighters or mixed martial arts. But their language, diction and tone aimed to compensate for appearances.

That stance took a turn for the worse when they mentioned the double strand of an exclusive appearance of Killer Instinct in the Microsoft Xbox One gaming format…and their partnership with Microsoft. That was a wrong move. Because that did it.

Yes, the booing began as their audience turned from being appreciative to distinctly unhappy. All in all, it was a very unhappy turn of events. However, it could have been worse. Because with more than 3,000 fighting gamers attending the Las Vegas event the Double Helix presentation itself had only a relatively small audience. Sometimes a small audience can pay off. Perhaps even more fortunate for a fighting game conference, the event didn’t turn really ugly! Not like this Bulgarian conference speech, fortunately!

Did the presenters expect such a reaction? Perhaps not, but they must surely be aware of the views of gamers on Microsoft’s involvement with gaming. It’s a matter of their DNA. Microsoft just inspires such a reaction…fairly or unfairly. It happens. Because we also noted how in Switzerland there’s even an anti-PowerPoint party, contesting elections no less. So, that’s the Microsoft effect again, we guess.