Conference speakers might dread one or two things. The lights going off or losing power might be a problem. Losing control of the autocue, a teleprompter freeze or the PowerPoint slides could also stack up to a whole heap of trouble. But being shot at isn’t your typical concern. That’s exactly what happened to Ahmed Dogan with a Bulgarian conference speech yesterday. More precisely, his would-be assassin tried to shoot him with a gas pistol and singularly failed to do so. Fortunate indeed. 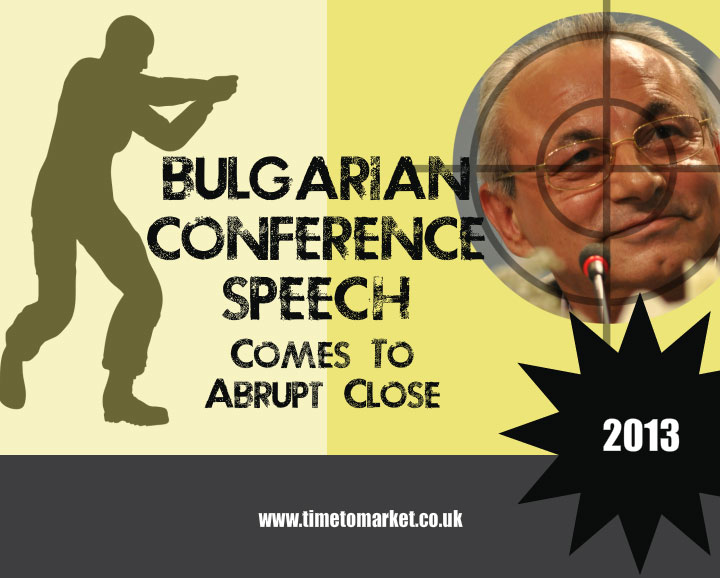 Mr Dogan leads the Movement for Rights and Freedoms, a liberal-oriented, ethnic Turkish political party in Bulgaria. His Bulgarian conference speech was in the National Palace of Culture in Sofia. Where he was interrupted by a man who walked on to the podium and then proceeded to point a pistol at his head before trying to shoot…twice.

Yes, that’s right. Because he tried to shoot. It’s got to be said that Mr Dogan’s luck was in. His would-be assassin proved to be the least lethal and most incompetent assassin one could ever meet…not that you’d really want to.

It’s fortunate that there aren’t many precedents for speakers being shot at during a conference speech. Of course Teddy Roosevelt was shot several times before he gave a Presidential election campaign speech in 1912…he then went on to deliver that speech with blood dripping from his shirt. He lived.

That wasn’t the result of course for Malcolm X who was assassinated as he gave his speech at the Audubon Ballroom in New York in 1965. He died.

Other public speaking events have been interrupted by lethal force. A victory speech by Pauline Marois in 2012 was interrupted by a gunman in her audience who shot three people. One died. The Quebec Premier-elect returned to the stage, finished her speech and advised people to leave quickly and calmly. A very cool reaction.

Mr Dogan’s a lucky man. He returned to the auditorium several hours after his speech was interrupted and received a standing ovation. Quite right. But he never did finish that speech.

You can read plenty of public speaking tips with Time to Market, such as one that’s all about giving your conference speech. We undoubtedly can’t prepare you for an incident experienced by Mr Dogan. But we can prepare you for most other eventualities with public speaking skills coaching. You can choose either a one day or a half-day coaching session to get you ready for your next speaking event. So, please don’t hesitate to get in touch when the time is right.