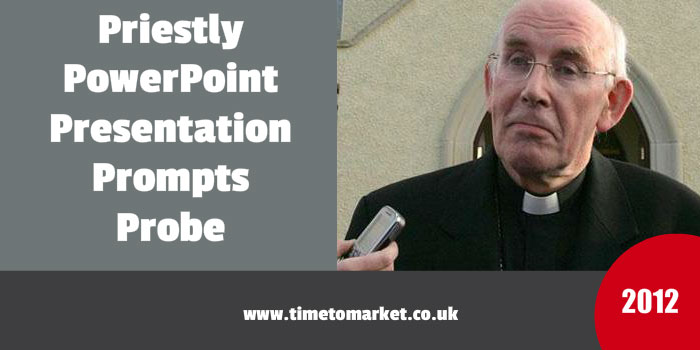 Clearly this wasn’t the subject of Father McVeigh’s presentation. Cassock flowing, he fled in embarrassment. We understand that he only re-appeared some 20 minutes later to wrap up the presentation. And that was possible, of course because a Communion coordinator and other teachers gave the presentation in its entirety. But, probably, without those explicit images.

And will there be consequences? We’d suggest more focus on Father McVeigh’s presentation design choices. But, apparently the Primate of Ireland, Cardinal Brady, is to probe. He has launched an investigation into the incident. It’s probably no consolation to the embarrassed priest. But the police have signaled that no offence has been committed. So this is probably one of those deeply embarrassing incidents that the Church would want to avoid. But probe it must. So, probe it shall.

When you want your PowerPoint presentations to go without a hitch you can always aim to boost your presentation skills. Just join one of our regular, scheduled training courses or opt for a one to one presentation coaching session. It’s your choice. Please don’t hesitate to call when you want some help with your presenting skills.