Franca Sozzani, the late Editor in Chief of Vogue Italia, noted in her 2012 speech at Harvard University that fashion is but one cause of eating disorders. But we should recognise that this Sozzani Harvard speech did make that very point emphatically. 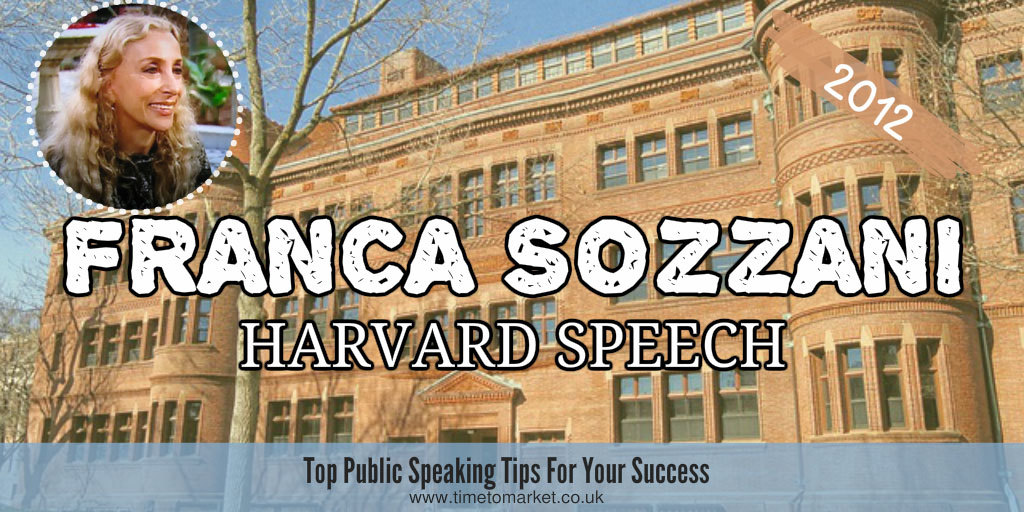 Her wide-ranging speech at the university noted how fashion was but one of a number of factors involved in eating disorders. The others included pro-anorexia websites, difficult family life, and the food industry. We remember that the Prince Charles food speech made a similar connection.

It’s brave for such a prominent woman in the fashion industry to become embroiled in this debate…particularly with a speech at Harvard University of all places.

Meat On The Bones In This Speech

But her speech did just that. Its structure accounted for the various causes of eating disorders in a well-ordered way. And it also laid into the other causes…not least the food industry, with some damning facts and figures. That was, perhaps, to be expected.

Her speech did suffer from the lack of a single objective or central theme. Yes, it was clear that she wanted us to acknowledge that fashion was but one factor in eating disorders. But how important is that factor? Where does it rank against the other factors? We were none the wiser after this Sozzani Harvard speech.

Her speech also suffered from verbosity. Too long sentences were everywhere. Her first sentence indicated what her audience could expect:

The health concern associated with anorexia and eating disorders, generally speaking, does not seem to wane: indeed, results of specialized studies show, in the best case scenario, an unchanged outlook with the higher incidence occurring in the teenage female population (although the number of male patients is also on the increase) from economically well-off countries.

Food For Thought With This Brave Speech

And it continued in that vein. This was a brave speech from the Italian Vogue editor in chief. No doubt her contribution will be digested by both sides with differing appetites.

When you need some advice and assistance with your next university speech or indeed any speech, you can find plenty of tips here. Because we have more that 100 top tips for public speakers and presenters everywhere. And when you need more specialist focus, don’t forget that a public speaking course or tailored coaching might be just the ticket for your success. So, please don’t hesitate to get in touch when the time is right.