Taking the theme, Building a Better Future, George Osborne’s Cardiff conference speech at his party’s Spring Conference in Cardiff proved to be competently delivered by a speaker who’s had his share of catcalls from the audience. 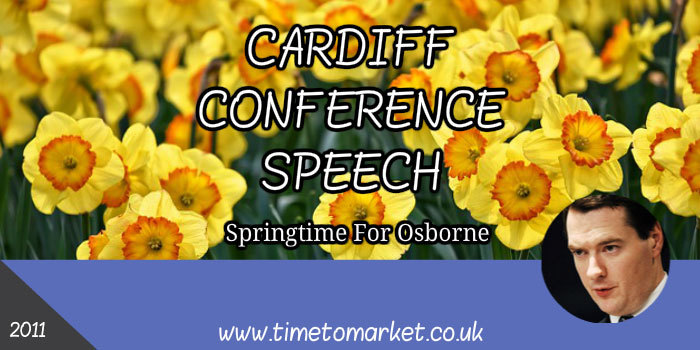 There’s still work to be done with his delivery but it’s greatly improved over the year with more gravitas and depth. Because, his speech writing is fundamentally sound. And his voice sounds much richer than the reedy little thing we heard some years ago.

He got things moving with a linked set of phrases that he repeated three times to flesh out the progress made in the last year:

It’s reminiscent of Martin Luther King’s beginning to his I have a Dream speech—without the obvious poetry!

But he does use metaphors in his public speaking. And this speech was no exception:

We are on a hard road to a better future

The Jasmine revolution seems like a desert storm that has swept out of a clear blue sky.

And then there are the headwinds that are not in Britain’s, or any one country’s, control.

Quite lyrical. But all this fancy rhetoric didn’t stop him from hitting his opponents from afar. So, he treated his audience to some witty swipes at the Labour Leader, the Shadow Chancellor and the former Secretary to the Treasury:

And Ed Miliband should have taken more care in photocopying them.

That note left by Labour’s departing Treasury Minister said it all: there was no money left.

How Liam Byrne must regret writing that note. It’s given George Osborne plenty of mileage in his speech writing.

An awkward and annoying section of his speech was when he asked himself a set of questions and then answered them immediately. This is something that the Tory party leader is also doing. But, that doesn’t make it right. Because it’s annoying, especially when it’s delivered in a quick-fire pattern.

Has it been easy? No.

Has it been popular? Not with everyone.

Was there an alternative? No there was not.

However, these are not rhetorical questions. Because it’s a format devised for Today programme interviews, not public speaking platforms.

His Dear Leader’s liking for short sentences is also catching. On Saturday George recited this section from his speaker’s script:

The panic in the markets.

Think what that would bring.

Britain next in the queue behind Ireland and Greece.

It’s a tolerable speaking technique…when you don’t over-do it. George uses the technique quite a bit, probably because it covers the ground quickly and it’s not over lyrical.

However, this proved to be worthy speech for a Chancellor who’s beginning to sound important, not self-important.

You can discover plenty of tips for public speakers with our regular series of public speaking tips, podcasts and videos. And, of course, when you want to give your own public speaking skills a further boost then why not join a training course. And, because you can join a public speaking course in Cardiff, or one of more than 40 training centres you are never that far from training. Or, as an alternative we can even train your whole team at work. So, whatever your choice, please don’t hesitate to get in touch when the time is right.