It's not often that a Chief Dentist's speech makes the news headlines. So we hope that the Chief Dentist hasn't bitten off more than she can chew with her speech today at the NHS Health and Care Expo in Manchester.

Appointed in July 2015, Sara Hurley spoke at a satellite event at this major NHS jamboree. Speaking at the Manchester Central conference centre, the Chief Dentist's speech was a polished performance as you might expect from a senior NHS official.

We'd expected a a more clipped, brusque style from the former top Army dentist. But it does appear that the NHS speech writers are involved now. That's our evidence-based conclusion. 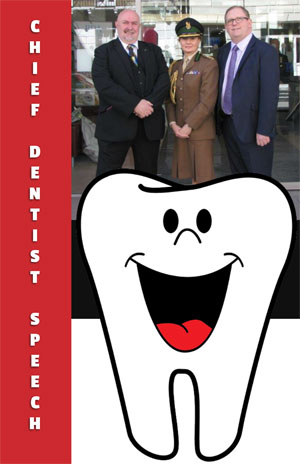 Expo 2016 provides us with a platform for our evidence to kick start the change in attitude from all those that have a responsibility for designing care pathways and delivering evidence based efficiencies to NHS funded care.

Good grief! There's a sentence and a half. Presumably there's something lurking in there. We just need to extract it.

Because, that's often the problem when you let policy wonks anywhere near a speech. They corrupt it. It becomes all tarred up.

Best practice might involve a change of scale and some further polish.

The Chief Dentist's speech wasn't the only speech at the Expo that was a bit long in the tooth. We heard from Matthew Swindells, the National Director for Commissioning Operations and Information at NHS England. Because with that job title you might not expect brevity. And that proved to be the case.

There is a huge challenge out there. We are evolving new models of care, we are trying to create more freedom but to people who say we need to send more guidance, I say ‘you need to show more imagination and we need to solve these problems locally within the context of the extremely hard exam question that the Secretary of State has set us’.

and, yes, you know the drill:

My message to them is that they are still part of our efforts to transform technology across the country and that there are going to be other ways for them to access money, development and clear guidance because I’m not looking to have any child left behind here, we need to move everybody forwards.

Jargon. Management speak, mixed metaphors and a USA education reference. Very strange indeed. But at least we had an attempt at a position taker.

Was it all such a mouthful?

No, there were some exceptions.

Dr Katherine Sleeman for example. She's the NIHR Clinician Scientist and Honorary Consultant in palliative medicine at the Cicely Saunders Institute of Palliative Care. She noted…

"If we can’t get this right, we won’t get the rest right."