Refreshes The Parts Other Speakers Don't 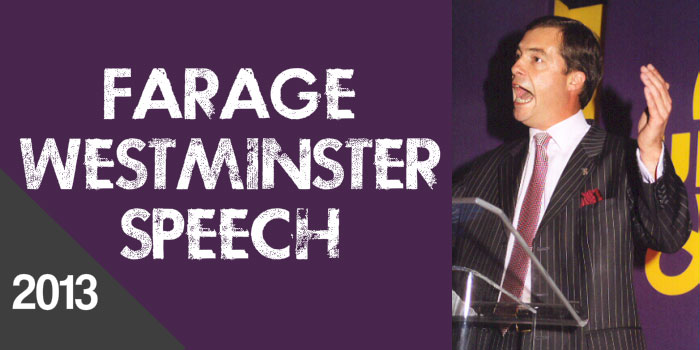 Refreshments, along the lines of those imbibed by Eric Joyce MP, were evident. In fact they feature in most speeches given by the UKIP leader, Nigel Farage. That’s because they often feature as direct reference points or consumed beforehand. And, that’s the style of the man. He’s quite unlike any of the other party political leaders.

So, his presence in Westminster for a speech was as unlikely as it was refreshing. His seat is in the European Parliament which itself sounds unlikely  But that’s his bridgehead into UK national politics.

Whether all the bouncy rhetoric actually means anything is another matter. A matter for the voters in the forthcoming local elections, planned by-elections and opportunistic campaigns between now and 2015.

In the meantime we can enjoy the fun of a party political leader who’s cut from a different cloth to the leaders of the other political parties. His public speaking style has a unique charm and fascination. Or we think it’s unique in the modern safe-speak monotony of national politics. Perhaps it’s an old-worldly style.

Whatever, we can only hope that the fun continues without too significant a foot in mouth incident along the way. It remains a possibility.

When you need to give an entertaining speech, in Westminster or elsewhere, you can depend on our public speaking skills refresher. This half-day of skills tuition and practice gives you the techniques and confidence for your next speech. You can plan the coaching session at your own workplace. Or, you can choose one of our 40 plus training centres around the country. Please do not hesitate to call.