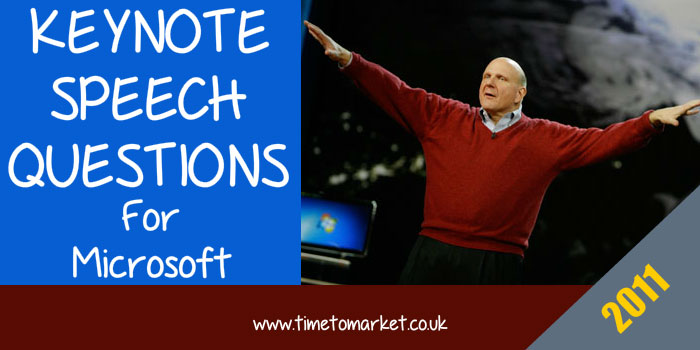 This time people are dissecting Microsoft’s decision not to speak at the Consumer Electronics Show 2013, and they seem to want some answers.

Microsoft has given the keynote speech at the industry’s pre-eminent exhibition and conference for more than 20 years. Most recently, since Bill Gates stood down as the CEO, it’s been Steve Ballmer, the new CEO, who’s delivered these speeches.

So it’s his decision not to participate in the event after the 2012 show that’s attracting attention. Does Steve Ballmer doubt his public speaking ability? Does Mr Ballmer suffer from a lack of confidence? Have these triggered Microsoft’s decision? Probably not.

Steve Ballmer might not always be the most eloquent of keynote speakers. But he more than compensates for that with a raw energy that’s palpable. A Steve Ballmer speech is typically a riot of energy and conviction.

His enthusiasm for his company’s products and services defines him as a speaker. So, it’s improbable that the decision to forsake a keynote speech at the CES 2013 show has anything to do with a reluctance to speak in public.

More realistically one could expect that a series of annual announcements made at the CES show and others no longer fits with faster-moving product developments.

Expect Steve Ballmer to continue his speeches. We expect that Microsoft will attend the CES 2013 show. But don’t count on Microsoft using this show or others as platforms for major announcements. We sense that Microsoft events will be better outlets for these announcements. Therefore, we shouldn’t be over-concerned when a business raises keynote speech questions, answers them and then decides not to participate. It’s healthy.

You can get yourself ready for your next keynote speech with these questions to ask before a presentation or speech. But don’t forget that a public speaking skills refresher will also give you the skills and confidence to be at your best before a keynote speech. Please don’t hesitate to call when you need more information.