There was a time when a Presidential eulogy delivered by one West African head of State to a former head of State was characteristically short. And there was also a time when it might have been a lot more violent. A short order. Perhaps on Labadi beach at dawn. 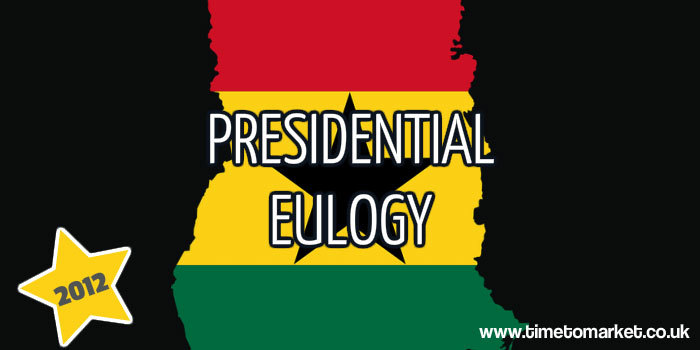 But things in West Africa have changed. Nowhere more so than in Ghana where the recent death in office of President J.E.A.Mills heralded a peaceful transfer of political power to his successor.

Thus, his successor, President John Dramani Mahama, gave the Presidential eulogy at the funeral of the late President J.E.A. Mills this week.

Fittingly, his eulogy brimmed with metaphor from its beginning:

The Presidential eulogy paid full tribute to the former President as it detailed his achievements and character as Ghana’s leader.

So the eulogy used repetition to good effect:

As I look across the entire landscape today I see unity, I see a sense of purpose written on the face of every Ghanaian, I see resilience, I see determination and a resolve to prosper. We are indeed one people with a common destiny.

Metaphorical images abounded…flames of freedom and topical images of torches:

we proudly carried the hopes of an entire continent or whether in liberation as we sparked the torch of freedom, a torch that blazed for decades and a torch that continues to blaze from Cairo through Khartoum, through Addis Ababa to Cape Town.

We broke the adversity of Africa’s lost decades and peacefully passed the baton of leadership from President Rawlings to President Kuffour and then on to President Mills who lies before us.

The Lodestar Of African Freedom

The President’s eulogy managed to include as reference to the lodestar of African freedom:

You can read more public speaking tips with our regular series of posts, podcasts and public speaking videos. And, when you are ready to give your public speaking skills a real boost then please don’t hesitate to get in touch. A public speaking course or coaching session might be just what’s needed to get you ready for your next eulogy or conference speech.