So the “Little Master,” Sachin Tendulkar has retired. Retired in style with a score of 74 in his last innings playing for India against the West Indies. His 200th Test match ended happily with India winning by an innings and 126 runs. And then, with an adoring crowd listening to his every word, the Little Master began his retirement speech. 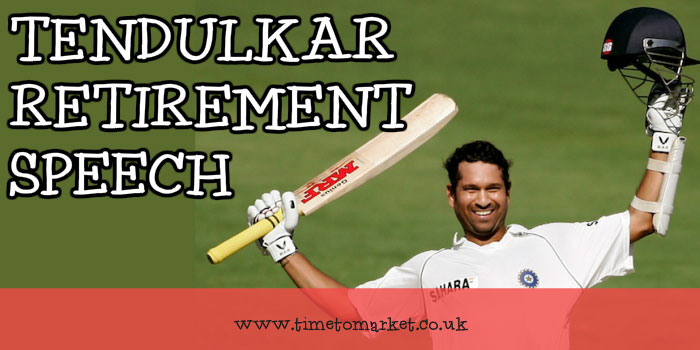 A Retirement Speech From The Master, Sachin Tendulkar

And what a retirement speech it was. He’s a master craftsman in the crease with a deft scoring touch capable of building an innings over several hours. Fortunately his retirement speech wasn’t such an epic. But it was long. A long goodbye.

But that wasn’t the scenario on Saturday at the Wankhede Stadium in Mumbai where a capacity crowd of adoring fans cheered him on…each and every word.

His speech lacked a degree of structure. But that wasn’t really the point. It took the form of a series of thanks to just about everyone involved in his 24 year Test cricket career. And that worked.

In terms of its duration–he knew this was becoming an epic speech:

I know my speech is getting a bit too long, but this is the last thing I want to say. I want to thank all the people here who have flown in from various parts of the world, and have supported me endlessly, whether I scored a 0 or a 100-plus. Your support was so dear to me and meant a lot to me. Whatever you have done for me.

But, epic run maker that he is, he kept going to the close of play, no wobbles or nerves as he reached his conclusion. No problems. You can prepare your retirement speech with a public speaking skills refresher. This half-day skills refresher gives you the perfect chance to refine your leaving speech and practise with a public speaking coach. Please don’t hesitate to call and discuss.