The Talking Is Over For 2017 Election

Well, it's all over bar the voting and then the counting. So, the leaders of the respective parties gave their final campaign speeches last night and it's now quiet. For a day at least. The way this campaign has gone, it could be very noisy again tomorrow. 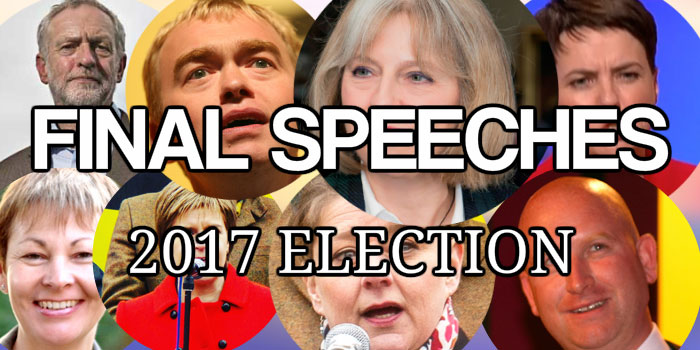 Final Campaign Speeches For All The Party Leaders

Jeremy Corbyn tallied 90 speeches during the campaign. A commendable public speaking effort. He gave a speech in Harrow in the early evening before he headed to his final event in Islington. Home turf. There, the rallying cry was succinct, if not elegant.

"Tories out, Corbyn in!"

Theresa May gave her final campaign speech in Birmingham last night. By all accounts it was standard stuff, well-delivered and with a suitable number of Cabinet colleagues as backdrop. Her last campaign speech once again pointed to an organised on-message campaign...despite the manifesto wobbles.

"Standing Up For Britain"

Nationally we haven't heard much from Nicola Sturgeon in recent weeks. Yes, of course, she was very active in the early days. Because that was when we heard about, "the coalition of chaos" ad infinitum. But she returned to a familiar theme with her final campaign speech last night.

"A vote tomorrow for Labour or the Liberal Democrats, parties who are third and fourth position in Scotland, risks doing one thing and one thing only – splitting the anti-Tory vote and allowing a Tory MP in the back door. Let us not take that risk."

Tactical voting. Back in fashion once again

Little Tim Farron has also competed for publicity this election campaign. There's no denying that the Liberal Democrats have organisation at the ground level. Don't suggest that their meagre showing of MPs indicates weak support. It doesn't. So, he chose Oxford as the venue to give his final campaign speech last night. A good tactical choice.

"Remember – every vote for the Conservatives is a vote for the dementia tax, NHS cuts, sacked teachers and a bad Brexit deal. If that’s what you want, go for it. If it isn’t, then don’t write Theresa May a blank cheque."

It's fair to say that the leaders of the smaller parties have struggled to make themselves heard nationally this election campaign. But don't underestimate their powers in selected seats. Once again, speeches apart, we will have a surprise or two.