A major economy speech by the Chair of the US Federal Reserve, Janet Yellen, is giving financial markets worldwide some pause for thought.

That's the sort of reaction you'd hope for from a speech of course.

Because her speech, at the Bankers' annual get-together at Jackson Hole in Wyoming, is widely expected to signal an interest rate rate in the USA later in the year.

This belief is based on the apparent strength of the labour market and rising inflation in the USA. 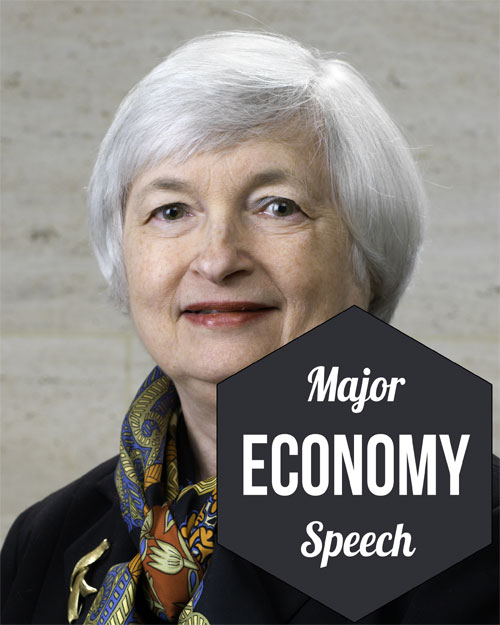 So, that's all very good news, of course. And it's all speculation for the moment.

Speculation. Because if there's one thing the Federal Reserve Bank doesn't do and that's release a speech draft before delivery. And Janet Yellen's speech is still a few hours away from its delivery at the Bankers Convention in Wyoming.

That's right, she hasn't even given her speech yet and everyone is terribly excited about its contents. Because froth, speculation and creativity are running wild!

Market affecting news, data, and reports are typically handled very carefully when it comes to a major economy speech. For good reasons, of course.

There are, of course, examples of financial market speeches that failed the test. Speeches that suggested or referenced data that consequentially had a destructive impact on share prices. Awesome.

One of our favourites, of course, was the hedge fund presentation that precipitated a major sell-off in a company's stock. It was an incredible presentation with incredibly poor results for the company in question.

With horror stories like these you can only appreciate why the Federal Reserve and other central bankers worldwide very much keep their words to themselves. Until, of course, it's the right time for their speech to become public.

So, realistically we can make a guess at the contents of Janet Yellen's major economy speech. But it's still guesswork until we have a transcript.

You can always discover more public speaking tips with our regular series of public speaking tips, podcasts and videos. And, when you are ready to really invest in your public speaking skills, then why not consider either training or coaching. Because you never know when you might need it. So, please don't hesitate to get in touch when the time is right.