A short New Year’s speech from Angola’s President might be welcomed at this time of year. But President Dos Santos’ speech proved nearly as impenetrable as the civil war that ended nearly ten years ago. Because A 44-word first sentence set the mark in this Angolan President speech. He continued with a sentence of 22 words. Mercifully he followed that with a 5-word sentence. Phew. 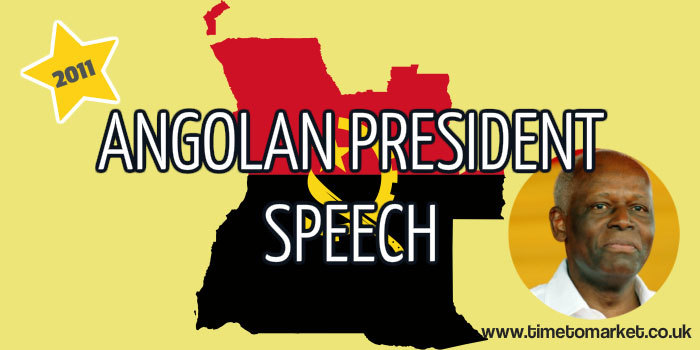 But if we thought that he was on the right path with his speech, then we were mistaken.

Because he continued with his Angolan speech fog. So, President Dos Santos went further with an 81-word sentence designed to lose any audience. Very hard on the ears.

This trend will be accentuated as from 2012, thanks to a better coordination of the implementation of the Micro- Small and Medium Enterprise Law, of the National Programme of Rehabilitation of the Secondary and Tertiary Roads, of the Water for All Programme, of the Programme of Municipalisation of Health Care, of the Development Rural Trade Programme and the Social Housing Programme.

The said Law must be applied in a creative way in order to also benefit such entrepreneurs as women that deal in street vending, creators of culture like musicians, producers, dance and theatre associations, handicraft producers, plastic artists, etc.

A Purpose To The Angolan President Speech

But beyond these difficulties the President’s speech meant well. There was purpose to his message. The democratic path is long and tiring. And yes, his speech did mention moving forward:

We still have eight months ahead and what matters is that everyone, within their family, find in this Festive Season, the love and energy required for us to move forward, in a spirit of unity and social solidarity, defending the highest interests of the Angolan motherland.

But you really can’t fault a speaker or his speech when it concludes with:

You can always discover plenty of public speaking tips with our regular series of posts, podcasts and videos. All set out to give you the right skills and confidence for getting your speeches just right. And, when you need more intensive focus on your public speaking, then you can always consider training or coaching. So, when the time is right, please don’t hesitate to get in touch.