To be effective a good speech must have purpose. It has to have a mission. So what was the purpose of this Julian Assange speech given by the WikiLieaks founder and fugitive from justice this week? 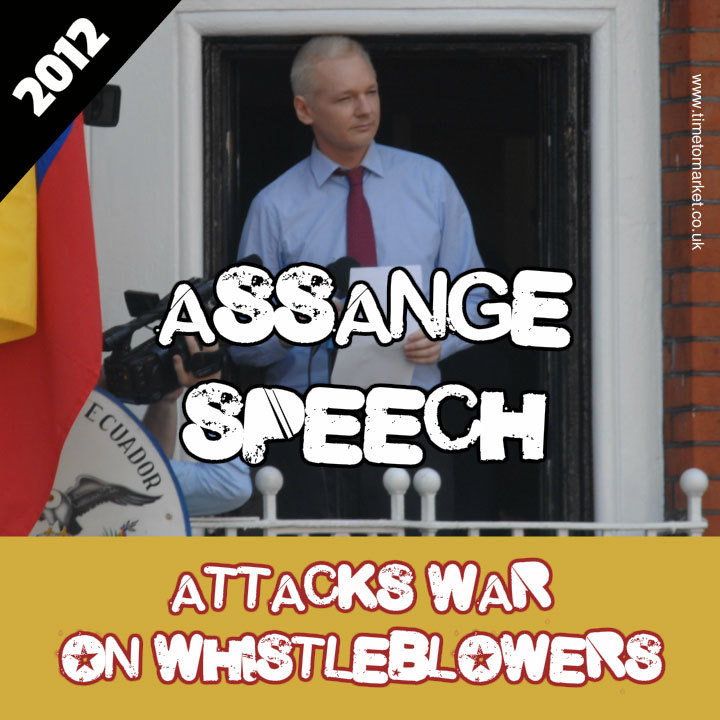 A Julian Assange Speech Attacks The War On Whistleblowers In 2012

Speaking from a balcony at the Ecuadorean embassy in London Mr Assange appeared a defiant figure. But beyond the defiance, things were not as they seemed. In fact the whole scene appeared odd. An Australian fugitive from Swedish justice sheltering in the Ecuador embassy in London, England. But, also a fugitive who is fearful of being extradited to the USA. And, to cap it all, a speech to a crowd of international supporters and the Metropolitan police. Odd. Such a very strange scene for a speech broadcast around the world.

But His speech held together. Reading from a prepared script his delivery was slow and deliberate as he worked off the crowd of supporters gathered below the balcony.

The speech had a solid beginning:

I am here today because I cannot be there with you today.

Of course. Moving on, the speech echoed “You” several times by way of thanks for his audience’s participation in his fight for justice.

He used repetition in an early section of the speech referring to a purported storming of the embassy by British police:

His rhetorical techniques were not smooth and polished. But he tried some good metaphorical references and questions to good effect:

The United States must pledge before the world that it will not pursue journalists for shining a light on the secret crimes of the powerful.

That one had to be included.

So was there a purpose to it all?

Yes, his speech thanked his supporters and that was needed. And his speech certainly served to emphasise the political consequences for Britain of seizing Mr Assange by force from the embassy. That’s not going to happen.

But, with a wider remit Mr Assange’s speech allowed him to repeat earlier mantras…end the war on whistle blowers and justice for all. And who could really be against that?

Mr Assange can count his speech as a success. But, no doubt the Metropolitan police will be happy to wait this one out. If funding permits. Because it can’t be cheap.

You can always discover more tips for public speakers from Time To Market. That’s because we publish a whole series of tips, hints and suggestions for most public speaking opportunities. And, when you want to progress even further with your skills, why not join us for public speaking training. Please don’t hesitate to get in touch when the time is right.