Loss Fails To Leave Father Of The Bride Speechless 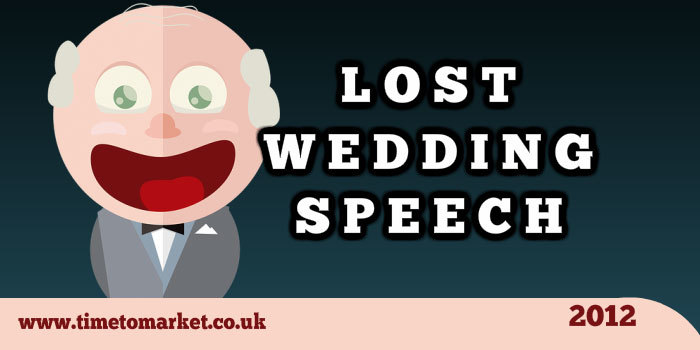 That’s a question that’s been asked of Alex Stonys in the last few days. Alex had the good fortune of looking forward to his daughter’s wedding last week. And he celebrated that good fortune with some quiet time in The Orange Tree pub in Baldock, Hertfordshire on the eve of the wedding.

That’s where he managed to lose his speech the first time.

But the good efforts of the pub landlord, Rob Scahill, then came into play. Finding the speech in the bar, his team read the speech diligently for any clues as to the owner…and failing that, any clues to the prospective bride and groom.

Working with two names, Marc and Carrie, the team at The Orange Tree set about finding the speech’s owner. Their initial efforts proved fruitless so they turned to Twitter and Facebook–announcing the fact that they had the missing speech.

Unfortunately the bride’s father had no idea about the lost wedding speech. And the first he knew about its loss and subsequent discovery was when one of the bridesmaids alerted him to the story on Facebook…on the morning of the wedding.

A happy ending to the story of the lost speech?

No such luck. Alex Stonys, the bride’s father retrieved the speech from The Orange Tree and got himself ready for the wedding of Marc and Carrie last Friday.

He left home accompanying his daughter Carrie in the wedding limousine for the ceremony in Epping. And it was halfway to the ceremony that he realised he’d left his wedding speech at home.

Yes, after all that, the father of the bride managed to lose his speech a second time. A lost wedding speech twice in 24 hours. It’s got to be a record.

We have to admire the coolness of Mr Stonys. Not one to panic about losing his father of the bride speech for a second time, he improvised:

I still did my speech. It was all fine, because it came from the heart. It was a beautiful wedding.

No doubt some of his practice and rehearsal came into play–but still, a very cool, calm and collected speaker. But, for all that, we do advise you keep a second copy of your all-important wedding speech somewhere really safe.