This Norman Baker speech at the Liberal Democrats Conference in Birmingham proved robust. His introduction cited no fewer than three quotes and references, including his mangling of:

Clearly prediction is very difficult, especially about the future.

But it was an effective start nonetheless. 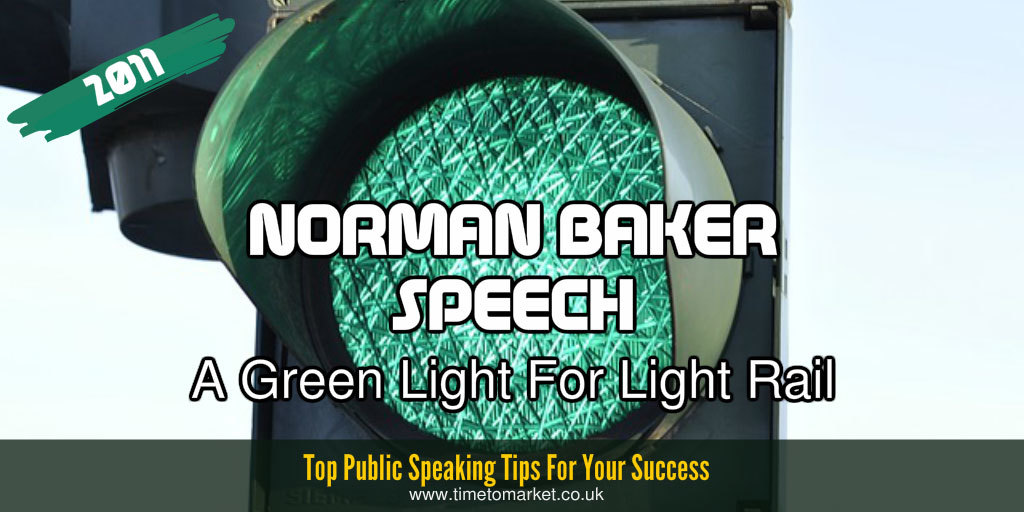 Structure and form were evident but more structure signals might be needed to keep the Minister on track in future speeches. Some of his sentences were also inordinately long. Quite dissimilar to UK commuter trains.

We are even finding funds for key local projects like the redoubling of the line between Swindon and Kemble, for which Martin Horwood still owes me a drink, and the installation of the Ordsall Chord linking Manchester’s Victoria and Piccadilly stations, so slashing journey times between Liverpool and Leeds.

Nearly impenetrable. But then the short sentences in this Norman Baker speech were equally opaque:

These journeys lend themselves to modal shift to cycling or walking

The Baker speech also included its fair share of policy wonk speak. His audience was treated to:

In the meantime we must drive further improvements to the rail network.

and, more references to modal shifts,

…there will be carbon gains arising from modal shift from domestic air to rail.

Whitehall Jargon In This Baker Speech

That word, delivering, again. Where would this generation of politicos be without that word? There was a time when delivery men and women delivered stuff. Now governments are at it as well.

Light rail presses many of the right buttons.

But the Norman Baker speech brimmed with clever allusions and references. For example, he took a European theme to combine a clever link to an old advertising campaign with more policy wonk speech:

Evidence from other European countries is that high speed rail reaches the parts other transport modes can’t.

However, there was no mention of Heineken here though, and positively no hint of drinking and driving from this transport minister.

This was a well constructed transport speech, with a good reference to the Chris Huhne conference speech. But, the Minister might want to be wary of personally financing the government:

…we are on track to cut carbon emissions from cars very substantially over the next 20 years, and with it our dependency on imported fossil fuel, as Chris Huhne’s investment in renewables bears fruit.

The Minister’s language here suggests a proactive approach. That’s good to hear from a speaker. But this isn’t pork-barrel politics yet.

Overall, however, this was a very worthwhile Kenneth Baker speech.