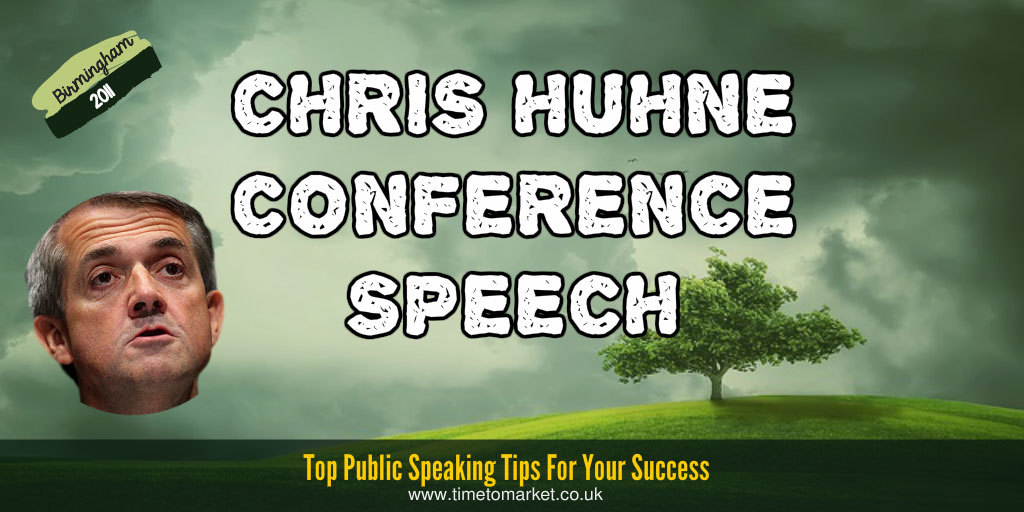 At issue was his choice of language. That is, the language that he used to describe his bed-fellows in government, the Tories:

Let that be a warning to the Conservative right here: we need no Tea Party Tendency in Britain.

Clearly, I can’t imagine that anyone will be at all offended by that remark coming from the Westminster School educated son of a prominent businessman. Not at all. Because, they know it’s a marriage of convenience.

Language An Issue In This Chris Huhne Conference Speech

Of more concern, however might be his understanding of Republicanism and the Tea Party movement in the USA. Since, here his remarks don’t bode well for someone in a senior government post:

The danger if you don’t compromise is now clear from America.

There the markets looked over the brink when the mad-cap Republican right in Congress would not compromise with the President.

There’s no guarantee that a Chris Huhne conference speech is read across the Atlantic. But, I’m sure that these comments might well re-surface when his department needs some co-operation from Congress. Because that’s how it works in the next round of climate change talks.

Beyond that, this Chris Huhne conference speech worked well. It was on the lengthy side. But he provided a good flow and logic. Because you can learn how to give a lengthy speech.

His introduction involved a statement of intent followed by a rhetorical question that he then set out to answer. A neat introduction.

He favours short non-sentences just like his fellow Westminster School-educated Party Leader, Nick Clegg. So, we were treated to:

As always during hard times, every other issue pales into insignificance besides the big issues of earning your living.
Keeping your job.
Making ends meet.

Sometimes these non-sentences followed in good order. On other occasions they didn’t. Was this a listing technique that simply ran away from itself?

Non-sentences or lists featured heavily in the speech. In the main they worked, but sometime the non-sequiturs grated.

He made good use of other forms of speech rhetoric. We heard some repetition, often in a listing fashion:

When people ask where is the demand coming from to power the economic recovery, tell them its clean energy.
It’s energy saving.
It’s low carbon transport.
It’s the new green industrial revolution.

A climate change position-taker was constructed very slowly and deliberately…

Now, some people argue that we should not be pushing low carbon business, because no-one else is….Covering 40 per cent of the Chinese population with low carbon economy zones. If that’s doing nothing, then climate sceptics have a weird idea of zero.

Now we are helping the poor where Labour flannelled.

We are acting where Labour talked.

We are delivering where Labour failed.

Of course this Chris Huhne conference speech might come back to haunt him. Not least for some of the colourful language used to describe his Tory party government bed-fellows and elected members of the US Congress. But this speech worked.

You can discover plenty of public speaking tips with our series of top tips for speakers. And, when you need to give your public speaking skills a further boost, then you can always consider training. Because a well-timed training course might be just what you need for your confidence. So, when the time is right, please don’t hesitate to get in touch.