Choosing the Bluewater shopping centre in Kent for a landmark benefits reform speech might not seem an ideal arrangement. But the scene of Prime Minister David Cameron’s speech on reforming the system of benefits was important. His audience was probably the “squeezed” middle class that has the most to gain from such reform…even if they are unwilling to articulate it. 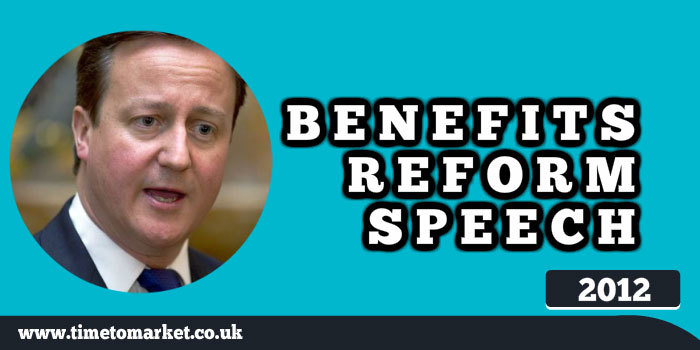 And the speech itself sought to put clear blue water between the policies of the Prime Minister’s party and those of their coalition partner, the Liberal Democrats and the Labour party.

His speech achieved that. As he mixed some faintly radical proposals with old-fashioned rhetorical flourishes.

So, he began his speech with an age-old but never-weary mechanic:

On my first night as Prime Minister, I said we would build a more responsible society.

Where we back those who work hard and do the right thing.

Where we look after the elderly and frail.

Building that society is simply not possible without radically reforming welfare.

Today, almost one pound in every three spent by the Government goes on welfare.

He managed to combine a list of three, repetition and a then/ now contrast.

His speech positively bristled with repetition and lists. These worked. But his speeches still include some hideous civil service speak. We heard:

And he is delivering remarkable results.

There was a time when people used to achieve results. But such is government’s fascination with the word, deliver, that it’s used everywhere. We also heard:

OK, so he’s not going backwards with this one, but driving forward is now a cliché!

Beyond these civil service speak lapses the Prime Minister’s speech could be characterised by his fine use of examples and case studies. With the touchy topic of benefits reform he was really obliged to provide examples. I’ll leave the veracity of the examples provided for others to discuss. But these worked for his audience:

On the one hand, it’s not right that someone can get more than £130-a-week DLA simply by filling out a bit of paper.

But on the other, it’s not right that those with serious disabilities have nightmare 38-page forms to fill in.

One studied hard at college…

Then there’s another woman living down the street. She’s only 19 years-old and doesn’t have a job…

These examples brought his speech to life and gave his wider audience something to latch on to.

A Rousing Conclusion To This Benefits Reform Speech

The speech continued to lay out various proposals for the coming months and years. Ending his speech he again chose a rhetorical flourish, combining a series of not this, but that statements:

Because governing is not a popularity contest.

It’s about doing what is right for our country not just for today but for the long-term – and that is what we are determined to do.

This proved to be a workmanlike speech that has certainly got people talking. As to whether it’s achieved a clear blue water of difference come election time…that’s for the voters to decide.

You can discover more public speaking tips with our regular series of tips for public speakers, podcasts and videos. And, when you are looking to give your public speaking skills a further boost, then why not consider some training. Please don’t hesitate to get in touch when the time is right.