Body language was back in the international news this week. And that’s all because of the inauguration speech from newly-appointed President Joe Biden in the USA. 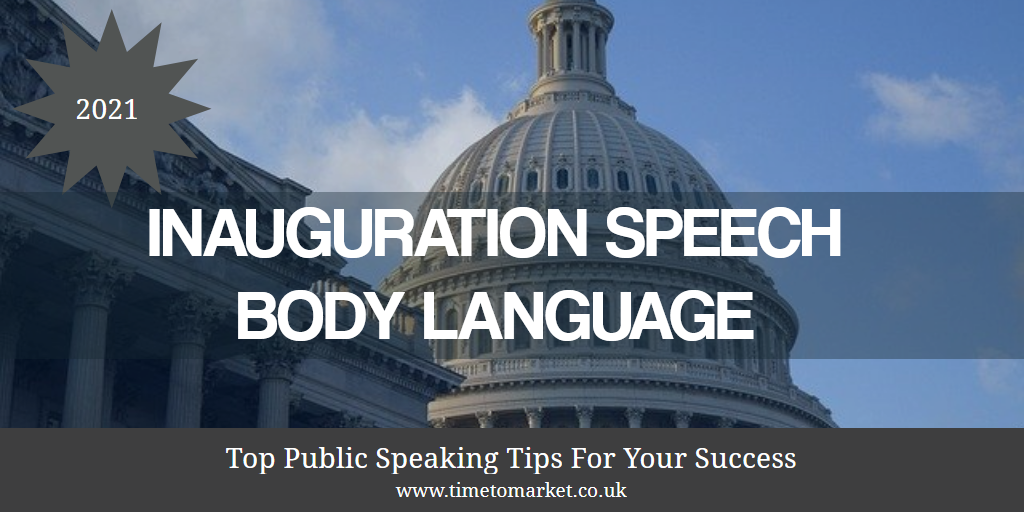 Body Language On Display At The 2021 Presidential Inauguration

Now, when it comes to giving a speech, we aren’t big fans of body language as a linguistic concept. Yes, your poise or your stance can prove indicative of nerves or a nervous state. And, likewise, the movement of your head or indeed the movement of your hands can also suggest uncertainty. But there again a frenetic presence on a public speaking platform can speak of self-assurance.

But your movements, actions and poise can suggest an assured position or inner determination. Certainly this Steve Ballmer speech from 2010 brimmed with movement, even if we found its language very odd!

Similarly your voice, its pitch and its timbre can equally suggest certainty or confidence. But, then again it could also point to a lack of confidence. It’s all incredibly tricky.

Now, why was it in the news this week? Well, in the main because there are two variants on the body language script for the new President Joe Biden and his inauguration speech at the Capitol.

The one body language story suggests that his speech was weak and indeterminate.

The other body language narrative suggests that he is assured, confident, calm, collected, and to a certain extent, has poise.

“President Biden came in ready to lead and asking for unity. He communicated in a personal way, not as a charismatic orator. His body language mirrored his words and he was ‘folksy’ and simple.”

You can see the clear disconnect here. And, yes, there’s obviously a political thread to each of the inauguration speech body language stories. That’s because all sorts of things can be read into body language. Pick your audience and then choose your narrative. Since that’s how this works when politics is at play.

And this is a problem. Because there are people who read too much into body language. As an experienced speaker that’s probably not unexpected. But as a beginner or relatively inexperienced speaker, it’s neither fair nor appropriate. So, If you have to give a speech, concentrate on the words and focus on what you want to say. It is after all, a speech. Even if it’s not an inauguration speech, own it.

Get Body Fit With Your Next Speech

You’re probably not planning on an inauguration speech in the near future. But, once we all get back to work, you might consider a welcome return to work speech, perhaps. In which case these tips might be useful.

So, don’t worry too much about the intricacies of body language. Because it’s always your job to focus on your audience and what they want.