Most of us are feeling the pain and strain of the economic downturn. We were famously told by the Chancellor, before his ski-ing holiday last year, that we are all in this together. Well now it seems that we are all in this together. That’s because an economy speech by David Cameron has re-bounded on him with extra interest. So that now he’s the one feeling the strain of speaking about the economy. The Cameron public speaking skills were on full show. But they were undone only hours later. 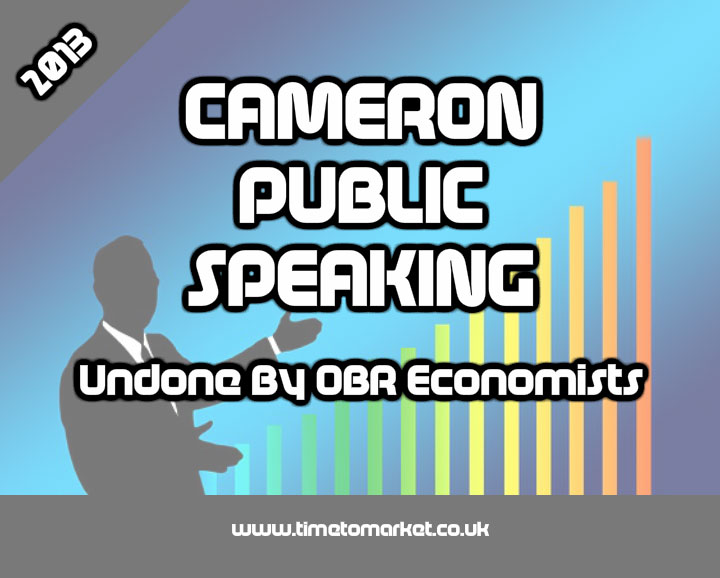 On the face of it his speech in Keighley, West Yorkshire, was not unusual. Yes, it was billed as a speech dedicated to the economy. And the Prime Minister showed off the Cameron public speaking skills to great effect…all pretty standard fare.

But it was his references in his speech to the independent Office for Budget Responsibility (OBR) that have caused the turbulence. In his speech the Prime Minister claimed one thing:

So there’s not some choice between dealing with our debts and planning for growth.

As the independent Office for Budget Responsibility has made clear…

…growth has been depressed by the financial crisis…

…the problems in the Eurozone…

They are absolutely clear that the deficit reduction plan is not responsible.

In fact, quite the opposite.

Only for his words to be countered the very next day by Robert Chote, Chairman of the OBR who claimed another:

For the avoidance of doubt, I think it is important to point out that every forecast published by the OBR since the June 2010 Budget has incorporated the widely held assumption that tax increases and spending cuts reduce economic growth in the short term.

There was more in his open letter to the Prime Minister that suggested pretty well everything in his speech was wrong.

The Cameron public speaking skills are not in doubt. But the way he uses statistics and data to reinforce his argument is questionable. Because the Office for National Statistics has caught him out before, of course.

Dodgy statistics and errant inferences have now caused a small storm of opprobrium and mirth among friends and foe alike.

It’s a pity because this speech was sound. It included a substantial reference to Mrs Thatcher’s “There is no Alternative” line that appeared in countless of her speeches before becoming a nickname (Tina):

Because there is no alternative that will secure our country’s future.

That was opportune after the humiliation of the Eastleigh by-election result. Time will tell whether the re-association with Mrs Thatcher’s policies has significance or is coincidence.

His public speaking skills go beyond just well-timed delivery. There’s the speech itself. In Keighley his speech positively brimmed with non-sentences. One of his favourite forms of speech.

In the cold reality of the bust that followed, we saw the true scale of the myth of the boom that had preceded it…

…the broken model of growth that was propelling our economy into an increasingly unsustainable position.

As a public speaking device it works, though it’s not pretty to read.

Of course his speech brimmed with metaphor, rhetorical question and position takers. Our favourite appeared to be a topical put-down to his Cabinet colleague, Vince Cable.

There are some people who think we don’t have to take all these tough decisions to deal with our debts.
They say that our focus on deficit reduction is damaging growth.

And what we need to do is to spend more and borrow more.

It’s as if they think there’s some magic money tree.

Well let me tell you a plain truth: there isn’t.

Great fun. The jostling for position will continue but I’m sure that we will hear more about the magic money tree, either in the Prime Minister’s public speaking or that of his political opponents.