50 Years To Ponder The Questions Raised In Final Speech

A 50-year prison sentence for Charles Taylor, for atrocities committed in Sierra Leone. That now appears to mark the end of the proceedings at the UN-backed special court for Sierra Leone. However, the final Charles Taylor speech of the former President of Liberia, made to the court in Den Haag, Netherlands, was not so straightforward. 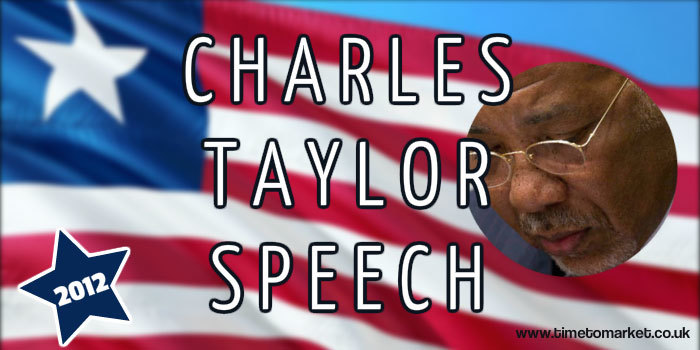 Yes, his speech did articulate a sense of sorrow

I express my sadness and deepest sympathy for the atrocities and crimes that were suffered by individuals and families in Sierra Leone.

But it was the rest of his oration to the court that proved disquieting.

His speech discussed the rights and wrongs of the criminal court process and its impact on other African States. In his speech he noted the coercive input of American President George Bush. Because it was the President who ensured that Nigeria surrendered former President Charles Taylor to the court.

And his speech also detailed the American security backgrounds of many, if not most, of the prosecution team. Quite bizarre CIA affiliations if he’s to be believed.

His speech proved to be no comfort to anyone affected by the war in Sierra Leone. But his speech did serve his primary purpose.

It got his wider audience thinking about the strange involvement of the United States in an earlier era. That of the brutal military government of Samuel Doe. And that regime only came to an end with the rebellion of Charles Taylor and others. Don’t forget that Ellen Johnson, Liberia’s current President, was one of three leaders of Taylor’s rebellious NPFL faction.

No Answers In This Speech

This Charles Taylor speech did not provide the answers. But now he has the time to ponder them as he starts his imprisonment in a British prison. That’s quite a different proposition to the Julian Assange balcony speeches that actually contributed to his prison stretch. But, there you go.