Mario Draghi Speech Fails to Strike Gold With The Markets

Competitors, spectators and commentators at London 2012 are all agreed. Over promising and under delivering wins you no friends. And, importantly, it doesn’t win you medals. Because to win gold you need to under promise and over deliver. And certainly that’s something the European Central Bank (ECB) President, Mario Draghi might want to consider. We’ve reached this conclusion after the latest Mario Draghi speech. 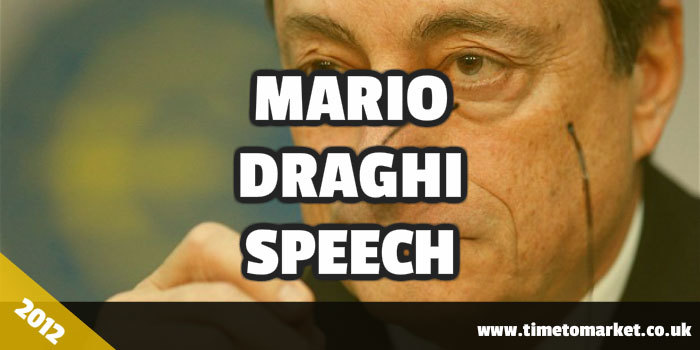 His speech at a press conference yesterday certainly seemed to under deliver on promises made only a week earlier.

The response by the markets? The Mario Draghi speech appeared to cause the euro to fall below €1.22 against the dollar. And his speech was reckoned to have caused the IBEX stock index in Madrid to fall by 5.2%, while the exchange in Italy dropped 4.6%.

All because of one Mario Draghi speech.

That’s the power of words when you are the President of the ECB and the Eurozone is facing potential financial meltdown. Of course, he’s not the only central banker to face this issue. Since a Ben Bernanke speech always had more potential impact.

Reading from a prepared speech this wasn’t a tour de force of exemplary public speaking. It was remarkably dispassionate…remarkable given the market’s response to his word.

He’s fond of the passive tense when speaking in public. That’s a favourite of bureaucrats and obscure government types. It suggests a  lack of ownership, originality and empathy. Audiences hate it:

In order to create the fundamental conditions for such risk premia to disappear, policy-makers in the euro area need to push ahead with fiscal consolidation, structural reform and European institution-building with great determination.

His speech left the door open for the necessary reforms of the European financial systems…but he might well find the stadium shut and everyone’s gone by the time he and the ECB come up with a concerted plan for gold.

You can read plenty of public speaking tips and listen to all the technique podcasts with our regular series of tips. And, when you want to strike gold with your own public speaking skills, then please don’t hesitate to get in touch about skills coaching or training.