When the cat is away the mouse will play. Or, if he’s a politician, he’ll give a speech. Particularly if he has some speech inspiration. That’s certainly the view of Australia’s shadow Treasurer, Joe Hockey, who reckons that a planned speech by the acting Prime Minister Wayne Swan is either an act of entertainment or a move to position himself as a future leader. 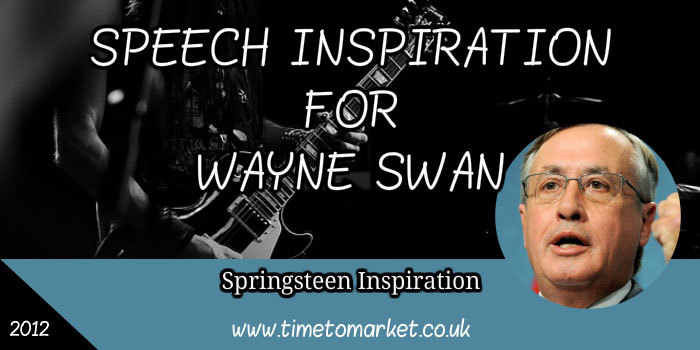 Wayne Swan is acting Prime Minister whilst the incumbent, Julia Gillard, is away on holiday.

Quizzed by ABC News on his speech planned for tonight the acting PM revealed not only the target of his speech–wealthy mining billionaires–but also the inspiration for his speeches–Bruce Springsteen (“the Boss”) song lyrics are the source. Well, that certainly sounds like an original approach to speech writing.

Not content with savaging the purported involvement of Australia’s mining leaders in the state of the national economy the acting Prime Minister uses Bruce Springsteen songs as a means of preparing himself for a major speech.

It’s not dissimilar to watching Australia’s swimmers entering the aquatics centre at London 2012, playing their own personal mood music on their iPods. Their favoured tracks get them in the right mood for the race ahead. And Mr Swan has the same idea. Because Springsteen songs do likewise.

If there is a difference it’s the subject of the Springsteen songs. Swan expects to use his speech to draw parallels between the structural changes in the US economy and those going on in Australia. A neat public speaking technique.

His speech will also address the point of fairness. That’s something that resonates throughout the entire collection of Springsteen song tracks.

What his boss will make of Mr Swan’s speech or the speech inspiration provided by “the Boss” isn’t known. His speech could be a case of Glory days. Or, indeed, his own swansong…Standing on the outside.

When you need some speech inspiration you can discover plenty of public speaking tips with our regular series of tips, hints and suggestions. Or, you can review this tip for speech writer inspiration. And when you are ready to take the next step with your own public speaking skills, then please don’t hesitate to get in touch.