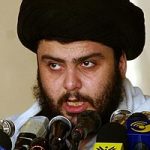 It’s not often that a public speaker can command an enthusiastic audience of 20,000. Western politicians must dream of such audiences…reaching that target only when they get either the US Democrat or Republic party nomination for President.

But the Islamic cleric, Muqtada al-Sadr, addressed an audience of 20,000 enthusiastic Iraqi supporters in the narrow streets of the holy city of Najaf last week without batting an eye.

The cleric has been the centre of attention before with some pretty extreme calls for removing American troops from Iraq. But his appearance on the podium on Saturday was calmer than previous outings.

He’s been biding his time in Iran apparently pursuing his religious studies ever since he fell out with the previous Iraqi Government of Prime Minister Maliki in 2007. A fall-out precipitated by the Government’s refusal to set a clear timescale for the withdrawal of US troops from Iraq.

Have his views changed? No. The Muqtada al-Sadr speech was certainly more restrained than previous outbursts, but the message of non-cooperation and the call for, “troops out,” sounded familiar. He can’t be accused of encouraging armed insurrection…but his rhetoric remains pugnacious:

There will be more Muqtada al-Sadr speeches, and there will be more political activity from the eight Sadrist Ministers in the new Maliki Government. Let’s hope that the rhetoric doesn’t turn murderous again. There’s much more to real political development than mass rallies, speeches and fiery rhetoric.

Previous Post Speeches From On High: Seasons Greetings From Our Leaders Next Post CES Presentation Hits WiFi Jam In Vegas