We are struggling to work out whether a Washington Post blog has got a legitimate point with a Hillary Clinton speech this morning. The blog, by Eric Wemple, draws attention to a speech given by the former Secretary of State, Mrs Clinton in Atlanta, Georgia. Thus, her speech was at a convention organised by the National Association of Convenience and Fuel Retailing (NACS). But the issue is with public speaking secrecy. 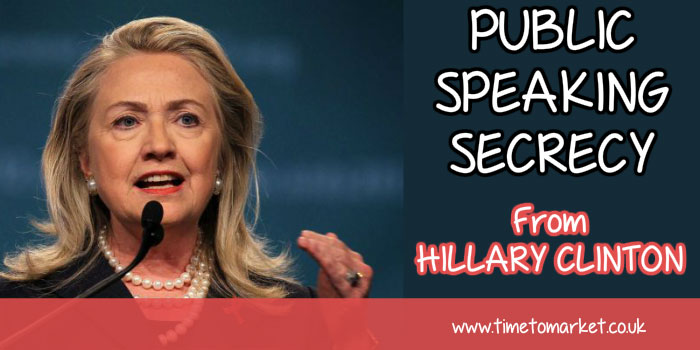 Public speaking at these events is pretty common for a former politician…especially one who might consider running for a Democrat party nomination for the Presidential elections in 2016.

What seems to be exercising the Washington Post is that her speech in Atlanta was barred to waiting journalists, cameramen, bloggers and twitterers. The injustice of it all!

She’s very much a public figure without a public role…so her speech given to the retailers stayed private. As too did her answers to their questions. One of those answers was supposed to be a 25 minute answer…phew!

There are two reasons for such a private speech arrangement:

All in, I’m afraid it’s a non-story. More’s the pity because her public speaking will definitely become a little less riveting in future. That’s of course, when she does announce her intention to run for a nomination.

You can discover a whole range of tips for public speaking with Telling It Straight, the Time to Market newsletter.