Throwing shoes at public speakers first came to our attention when former President Bush suffered the indignity as a speaker in Baghdad in 2008. It’s quite a tradition to throw shoes during unpopular speeches, such as this Pakistan President speech. Or, perhaps the Speaker Ali Larijani speech in Qom. So, in certain quarters of the globe, it certainly beats anything more extreme. But interrupt a recycling speech? In Las Vegas? 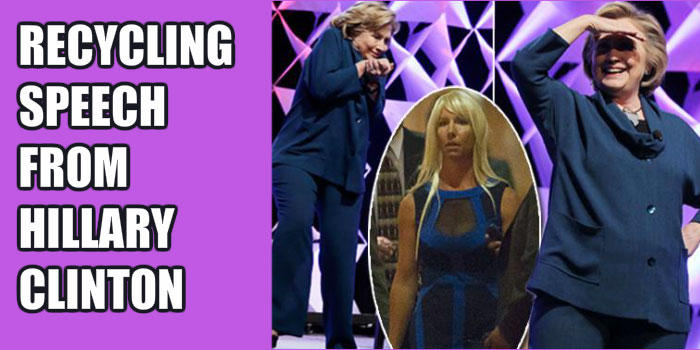 Typically, the worst thing we’ve found in Vegas is a Mayor Goodman speech. So when Presidential candidate Hillary Clinton was on the receiving end of a shoe thrower this week in Las Vegas her security detail was no doubt suitably embarrassed…but also quite relieved. Relieved it was a shoe. Only a shoe. And only a sole protester…albeit sufficiently well-heeled!

Mrs Clinton has been busy on the public speaking circuit since she left office as Secretary of State. Giving speeches definitely keeps her in the public eye. And speeches swell the coffers needed for a Presidential election campaign.

But her speeches rarely excite such physical reaction as we saw this week in Nevada. That’s not the deal for a Presidential hopeful at this stage. The fact that Mrs Clinton was speaking at a metal recycling conference made the whole affair that much stranger. Metal recycling doesn’t normally attract shoe throwing activists. Normally you might accuse a candidate of recycling their speeches during their campaigns. It comes with the job of running a campaign. Since campaigning was the express purpose of Mrs Clinton’s Nevada speech.

Hotel security and Secret Service personnel confirmed that the female show thrower, who was promptly detained, was not a conference delegate. She had in fact rushed through the conference reception gaining access to the auditorium in the process.

Still, we can commend the former Secretary of State on her reactions. Confronted with the incoming shoe, Mrs Clinton neatly dodged the shoe leather, queried the matter and then made light of it.

Is that somebody throwing something at me? Is that part of Cirque du Soleil? My goodness, I didn’t know that solid waste management was so controversial.

The security team had red faces all around, but fortunately the sole protester caused no harm.
You will find out plenty of tips for recycling your speeches and your speech material with a public speaking skills training course from Time to Market. So, when the time is right, please don’t hesitate to call us when you want to find out more.