State Of The Union Speech: Winning The Future

The President Obama State of the Union speech this week has received days of attention. Not, least, because for 221 years America has been absorbed by the President’s annual State of the Union addresses. Because the speech, given by the President in Congress, has been a regular occurrence since the days of George Washington. It’s got a wider audience now, of course. First broadcast on the radio in 1923 (Calvin Coolidge) and then on television in 1947 (Harry Truman). 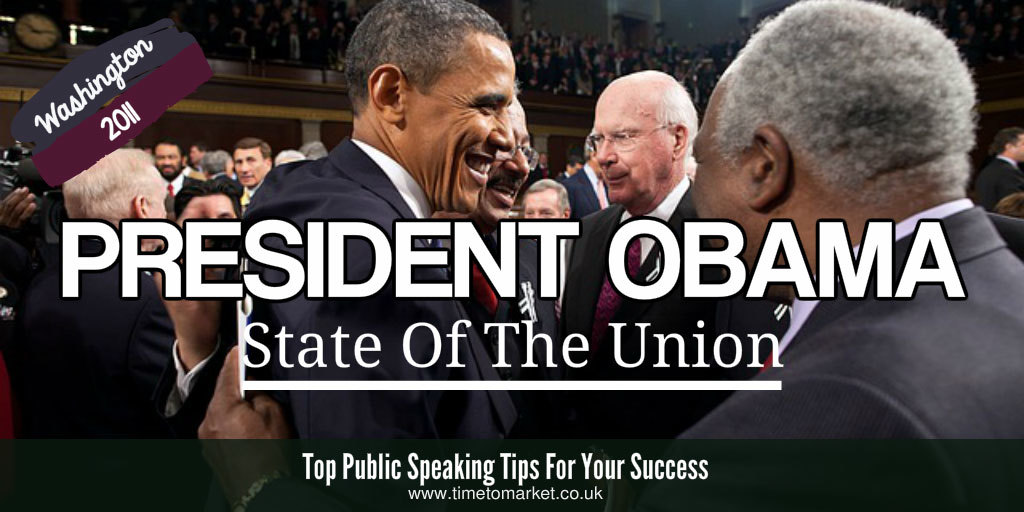 The State of the Union speech was live web-cast in 2002 (George W Bush) and broadcast on high definition television in 2004 (George W Bush). The net result? An audience for the speech of some 48 million.

Whilst this President Obama State of the Union speech on Tuesday night was not thought to be on a par with his Tucson speech given last week, it certainly rallied the faithful with a very strong call to arms.

Obama State Of The Union Speech Gets Going

He introduced his State of the Union speech with the assassination attempt on Congresswoman Giffords in Tucson. He noted how the shooting had served to unite America.

“But there’s a reason the tragedy in Tucson gave us pause. Amid all the noise and passion and rancor of our public debate, Tucson reminded us that no matter who we are or where we come from, each of us is a part of something greater– something more consequential than party or political preference.”

He’s prepared to play to the gallery with comments resonant of his earlier glories:

The word “dream” appeared 12 times in his speech. Was this An American Dream speech? Maybe, because he used the phrase to link in with the shattered dreams of one of the victims of the Tucson shooting and then the realised dreams of real everyday Americans. With his title, “Winning the Future“, this speech was future rich, not dwelling on the past or indeed, the bitterness of the past.

The President Concludes The State Of The Union

His conclusion was taken up with a re-affirmation of the special status enjoyed by America. This was a key part of his poignant introduction and it was no surprise that he returned to this point. Thus, he noted how America has no equal and is more than the sum of its parts. Many commentators drew a parallel with the “shining city on a hill” phrase used by Ronald Reagan in the campaigns of 1984 and his farewell to office speech.

Of course you can always discover more examples of good speech writing with our series of public speaking tips. Because with more than 100 top tips for speakers and presenters to choose from, there’s something for every event. Plus, when you are ready to expand your public speaking skills that bit further, then you’ll find that a training course or coaching session more than useful. Because a well-constructed training session gives you just what you need to succeed. So, when the time is right, please don’t hesitate to get in touch.