There’s something incredibly tiresome about hearing yet another speech plagiarism charge. And that’s especially so when that charge is levelled at a politician. 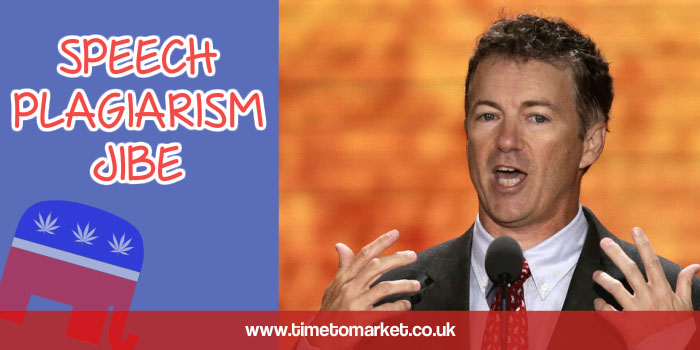 It does seem to be open season for speech plagiarism charges.

Now, we know that politicians seem to be give more speeches than anyone else. A mistaken belief. However, why is it that it’s always politicians who face the accusation?

Because charges of speech plagiarism by politicians are typically without foundation.

In most cases these are political battles being fought out over plagiarism charges.

He’s been in the news before concerning speech plagiarism. This time his accuser is serial tormentor and MSNBC host, Rachel Maddow.

There’s no love lost between these two over a significant political divide. So you can guess the political agenda here.

But political trolling aside, speech plagiarism is a nonsense. Yes, I’d have concerns if you lifted someone else’s speech in its entirety and then passed it off as your own work.

But only concerns. I’d suggest you were lazy rather than corrupt. In turn you might suggest you were short of time to write a speech. Fair enough. But next time employ me or a colleague to do the job.

And what if you’d borrowed a bit here or there from another speaker? Great. Using the words of other speakers within your speeches lends credibility and gravitas to your own words. It helps to set your material into a continuum of words spoken by others over time.

Should we be concerned by speech plagiarism? No, it’s as old as the hills, an accepted part of public speaking, speech making and writing. They all do it. Joe Biden was embroiled in a similar case in 1988. In Australia Anthony Albanese endured a mini-storm over Hollywood speech writing. In Ireland Premier Enda Kenny had fun poked at him over a lifted speech borrowed from President Obama. And, of course, President Obama borrowed material from Martin Luther King in his healthcare speech. And he does so very frequently.

My only advice to Rand Paul’s speech writer would be to ease the focus on recent sci-fi films as speech source material. Then, build more impact and gravitas with more serious words, phrases and quotes.

You can join a public speaking course with Time to Market and discover new ways to build your content. Learn all about the art of public speaking during a one day course, at your office or one of our training centres. Please don’t hesitate to get in touch.