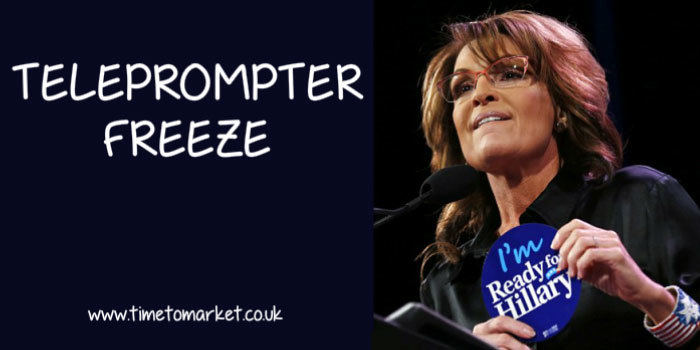 The fear of losing autocue can cause as much anxiety as the fear of not having it at all. A zero sum game.

No doubt Sarah Palin, former Governor of Alaska, had that anxiety last week. She was giving a speech at the Iowa Freedom Summit in Des Moines when the teleprompter froze in mid-sentence.

Now a teleprompter freeze is a problem for any speaker. But for Sarah Palin who has already indicated an interest in the 2016 Presidential elections it could have been a calamity.

Her response to the teleprompter freeze? She kept going. Or rather, she kept speaking, albeit a load of nonsensical gibberish…her speech went into meltdown.

She didn’t appear to pause or hesitate with her speech. Instead she began a seemingly meaningless rant.

Things must change for our government. Look at it. It isn’t too big to fail. It’s too big to succeed! It’s too big to succeed, so we can afford no retreads or nothing will change with the same people and same policies that got us into the status quo. Another Latin word, status quo, and it stands for ‘Man, the middle-class everyday Americans are really gettin’ taken for a ride.’ That’s status quo, and GOP leaders, by the way, y’know the man can only ride ya when your back is bent. So strengthen it. Then the man can’t ride ya. America won’t be taken for a ride, because so much is at stake and we can’t afford politicians playing games like nothing more is at stake than, oh, maybe just the next standing of theirs in the next election.

Wow! Despite, or maybe because of this, she received a standing ovation from her appreciative audience.

But what would you do? We know that President Obama had a plan B when he used his speech teleprompter. You can discover more interesting pointers for giving your speech, with a teleprompter or with a script, when you join a public speaking course. You can join a course at any one of more than 40 training centres. Or, you can ask us to run a team public speaking event at your offices. It’s your choice.