It’s taken some time to happen. But, now everyone’s talking about the President’s speeches again. Why? The cause is probably the spate of Republican rallies tasked with finding a Republican candidate for next year’s election. They’ve put the public speaking of the GOP contenders into sharp contrast with the speaking skills of the Presidential incumbent. But momentarily this week there was some hope for everyone. The President’s speech teleprompter went missing. Gone. Disappeared. 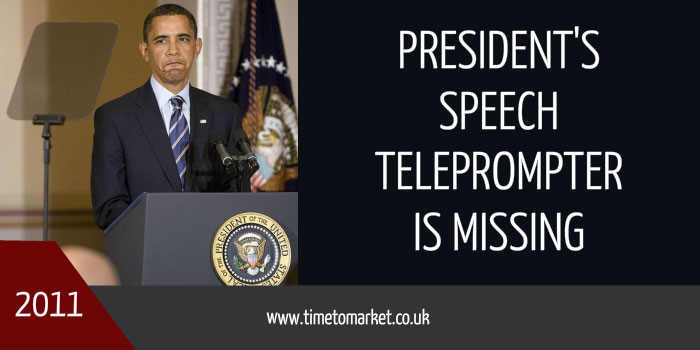 It all happened when the speech teleprompter, Presidential lecterns and a load of other speech equipment, valued at $200,000, was stolen after being left in a truck overnight. The location? Outside a Marriott hotel as the President pursued a three day bus tour of North Carolina and Virginia.

Remarkably someone found the truck and its precious cargo of public speaking paraphernalia intact. And, more remarkably, they found it outside a Holiday Inn Express! Competing hotel rivalry, perhaps?

Or, was it the work of Democrat loyalists wanting to hear the President without a speech teleprompter? Was it the work of political foes making mischief. Or, did someone move it from one hotel to another mistakenly! That’s a possibility, even with the well-choreographed logistics of the President. In all likelihood, that’s the scenario we reckon to be the case. But, who’s going to own up to that one? Own up, and you might be fired.

Whatever the cause, the President gave his speech at the Chesterfield county firehouse without his speech teleprompter. So, he used a set of laminated cards, cue cards. Apparently, however, the President spoke to the audience without hesitation or ill-effect. Someone asked his Press Secretary about the absence of the teleprompter. But when he replied, he made clear that it was always the plan to use laminated cards. Apparently he prefers cue cards to a teleprompter when speaking in a small room:

That’s what’s we call a plan B. Even the President’s speeches sometimes need a plan B. And, perhaps Sarah Palin needed a plan B when she suffered a teleprompter freeze.

So, when you need to work on plan A for your next speech don’t forget to contact Time to Market for a skills refresher. That’s because, this half-day session gives you the skills and confidence you need for your public speaking success.