If it wasn’t for the tropical surrounding, the gathered dignitaries, the press corps and the President you’d be forgiven for thinking that Secretary of State Clinton was listening to any old speech. But, it wasn’t. Because her boss, the President, was giving a Yangon University speech in Myanmar last week when the Secretary of State took a moment or five to take a quick catnap. A power nap. 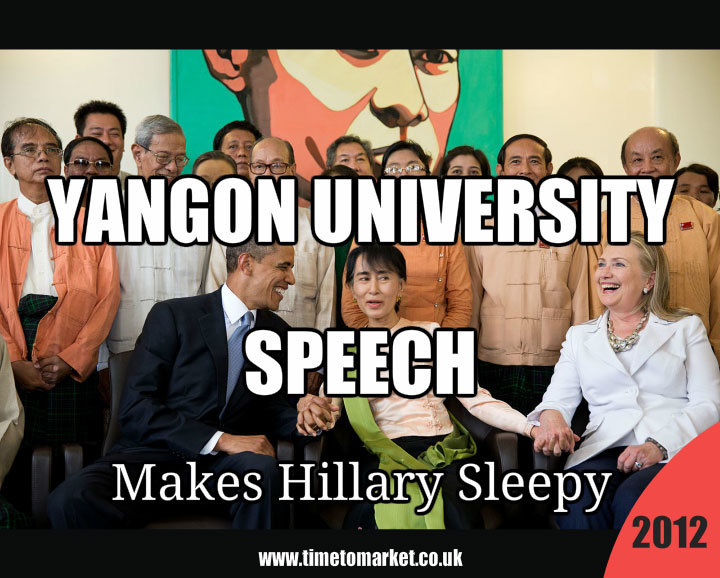 But, her little sleep during the President’s speech was captured by CNN television. Just as she dozed in the front row of the audience, flanked by democracy activist and Member for Parliament Aung San Suu Kyi.

She’s in good company. Because it’s not just a Yangon University speech that makes this happen. As others, indeed many others, have grabbed a moment’s quiet reflection during one of the President’s speeches. Vice President Joe Biden took a moment to relax with a quick sleep during the President’s budget reduction speech in April 2011.

But our favourite has to be the occasion of the President’s “Race to the Top” speech in 2010. On that occasion a student from Kalamazoo Central High School fell asleep in full view of the watching media. However, his misfortune was exacerbated by seating him right behind the President as he gave his speech. The President might have missed his snooze, but no-one else did! Ooops!

You can read plenty of public speaking tips with our regular series of tips, hints and suggestions for speakers. Perhaps some tips to help you really engage your audience? But, when you are ready for more focused training, then please don’t hesitate to get in touch.