Such is the nature of party rivalry within the Conservative Party that we never expected to hear another new Ann Widdecombe speech. Particularly after she volunteered for "Strictly". Because her rivalry with Michael Howard and his protege, David Cameron, ensured that Ann would never sit in the House of Lords as a Tory. Nor would she be elevated to any of the usual grace and favour positions for former politicians. Yes, that is the way it works. So, no big Widdecombe speeches in Tory colours. 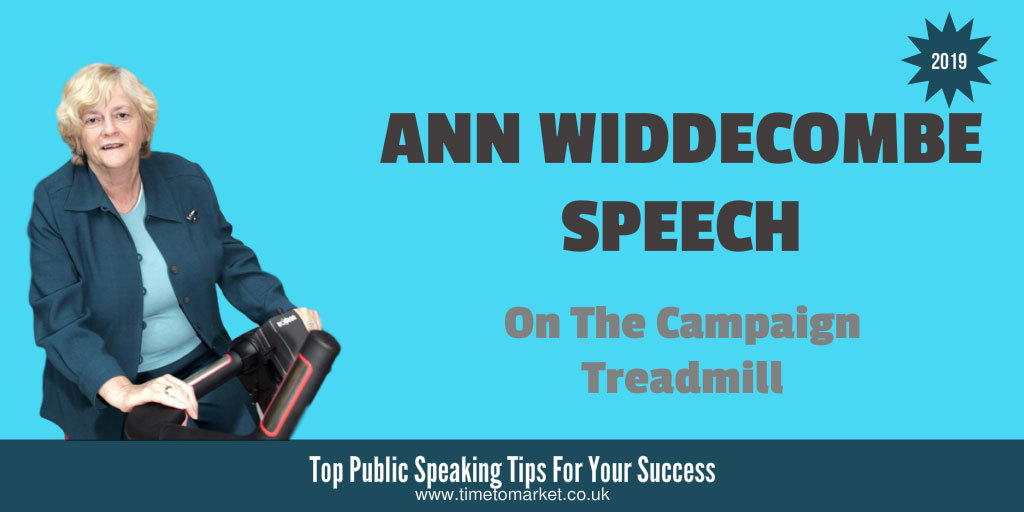 However, we now have all the opportunity in the world to watch Ann in action. Because after 50 years or so of being a staunch Tory, she's now a candidate for the European Elections on May 23rd…for the Brexit Party.

Ann Widdecombe Speech Has Impact. Oh, Yes It Does

And she's making some impact, that's for sure. Ann is no stranger to speaking from memory, without a written script or a lectern. She certainly pioneered that craft well before David Cameron did so at the Conservative party conference. A feat that earned David much acclaim, of course. But Ann did it first.

And now she's doing it again. Her delivery is certainly familiar, as is her tone. It's characteristically Ann Widdecombe. But, there's also an inner confidence to her words. A confidence that suggests she's at ease with her colleagues and the task ahead. And, perhaps that really is another contrast with her former colleagues at Conservative party HQ.

But there are real differences. And they aren't that subtle. Because they jump straight out at you. An Ann Widdecombe speech in Peterborough, and no doubt elsewhere now, is interactive. Now, we won't suggest that her considerable talent for pantomine theatre is paying off. But her interaction with her audience is fascinating.

Now, do you think that we can remain a member of the EU and make our own laws?

Do you think that we can remain a member of the EU and control our own borders?

Audience Interaction Works In This Speech

You can, of course, guess the rest. This was a four part question and answer session with her audience. And the interactive "No" answers to each question formed the basis of this Ann Widdecombe speech.

Audience engagement is critical for effective public speaking. Ann knows this, and so do her colleagues on this platform in Peterborough. We have to suspect that beyond Ann's panto experience, that of Nigel Farage in the USA is also at play here. Since he must surely have picked up some tips from watching Donald Trump campaign rallies.

The technique is familiar. She cues a name, there's a pause, and her audience fills in the gap with a "boo". It's all timed to perfection and, of course, faultless.

We also had a glimmer of the old Tory Ann Widdecombe when she introduced some classical Greek mythology to her Peterborough audience.

And we will clear out the Augean stables that is Westminster at the moment.

Is she a modern day Hercules? On the basis of this Ann Widdecombe speech, perhaps she is.

You can always discover more public speaking tips with our regular series of tips for speakers, podcasts and videos. Plus, when you want to boost your own public speaking skills, then you can always consider training. So, when the time is right, please don't hesitate to get in touch.