What To Do About Heckling During Your Speech

We are wary about discussing heckling for good reasons. Firstly, because it might enhance your fear of public speaking. And secondly, because we might suggest it's commonplace. Well, it isn't. Now, at the Comedy Store or the Banana Cabaret you might come up against it. But that's a different gig. But, even so, it's still good to know what to do about heckling during your speech. 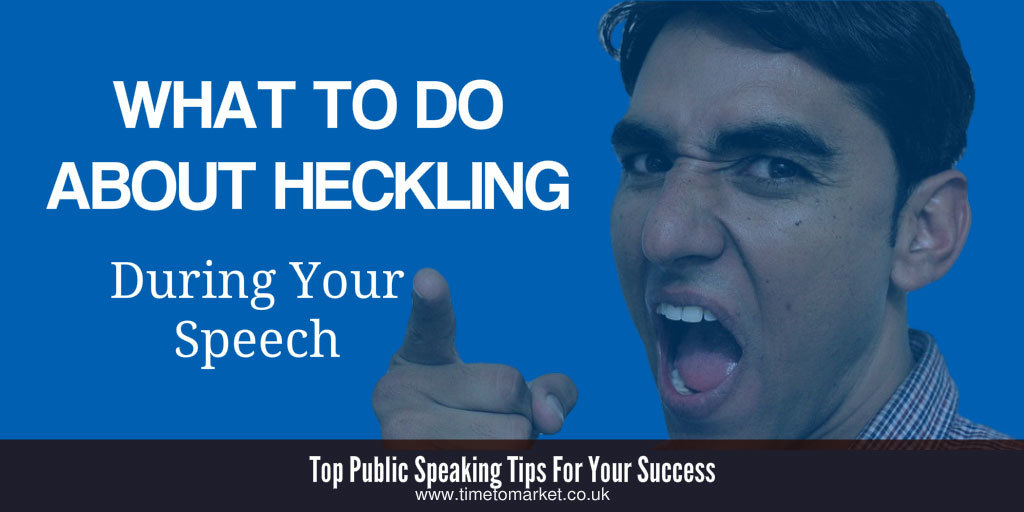 What To Do About Being Heckled When You Give Your Speech

The Prime Minister, Theresa May, came up against a heckler last week at the Wales Tory Conference in Llangollen, North Wales. And she performed admirably in the circumstances. Of course, the heckler, Stuart Davies, barely allowed the Prime Minister to start her speech to conference before he shouted out.

Why don't you resign?

What To Do About Heckling When Public Speaking

And the Prime Minister's reaction? Beatific would describe her face. She smiled indulgently at her heckler as he was gently removed from the room. So, a perfect reaction from her. Because your heckler is an attention-seeker, then getting involved with a discussion might not go to plan. Now, we know that Jacob Rees-Mogg does tend to speak with his hecklers. But, he's not the Prime Minister. And, of course, she does have some experience herself after her 2017 Conference speech nightmare.

So, be mindful that most of your public speaking is organised at proper venues with full consideration of safety and audience management. And, in most cases, there's a plan for removing hecklers or protesters. In some cases it's a bit more severe than others, of course. This Secretary Clinton speech was interrupted by a silent protester, before he was unceremoniously dragged out. That's how it is in the USA. In Iran it's distinctly dangerous. This Speaker Larijani speech in Qom came to an abrupt halt after heckling got going.

However, with your typical financial results presentation or corporate speech that's just not going to happen. But you should prepare yourself and follow a simple drill. Since, if your business works in the energy industry, then you might face environmental protesters. Or, your High Street retail business might face heckles from disgruntled pensioners who've lost their company pension. So, unlikely as it is, you need to know what to do about heckling in your speech.

What To Do About Heckling In Your Speech

So, you want to know what to do about heckling during your speech? Here are six tips:

And yes, these techniques do work. Not least because the vast majority of your audience want to hear you speak, which is why they are there in the first place.