It's a fair question to ask. So, did the Jeremy Corbyn conference speech aim to heal the Labour party rift? If that was its purpose, then perhaps it's a start at the very least.

Jeremy Corbyn's conference speech at the 2016 labour party conference in Liverpool was no towering tour de force. There weren't any major flights of rhetorical fancy or great oratory. 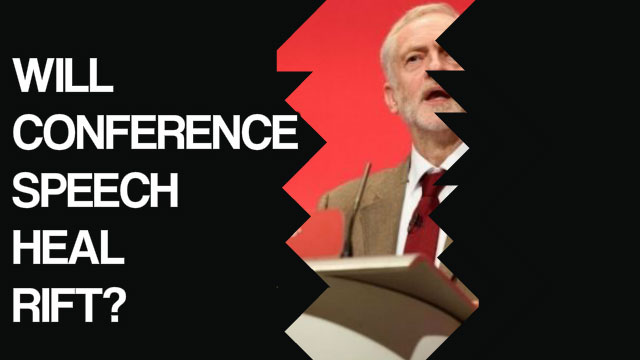 But it was solid. He certainly appeared more comfortable this year than his first Leader's speech at conference in 2015. And why not? Because he's just been re-elected again. Re-elected with a larger majority. And he's seen off the Labour MP plotters. So, that's quite something.

But this Corbyn conference speech wasn't an opportunity to gloat. Yes, there was a quip about his latest election. But that was it. There was much that his MPs should approve. Education, investment and housing, for example. But, perhaps not the plan to repeal the Trade Union Act or the re-nationalisation of the railways. Both are probably very politically difficult.

The Labour leader gave a good account of himself with his conference speech. Yes, there were some stumbles and he's not yet as fluent as he should be with a conference speech delivered with autocue.

We heard some humour…

Thank you for that introduction. And how brilliant it is to see the hall here in Liverpool, absolutely packed for the Labour conference, well I say it's packed but Virgin Trains assure me there are 800 empty seats.

And there were some attempts at rhetorical fluency.

It isn’t migrants that drive down wages, it’s exploitative employers and the politicians who deregulate the labour market and rip up trade union rights.

It isn’t migrants who put a strain on our NHS, it only keeps going because of the migrant nurses and doctors who come here filling the gaps left by politicians who have failed to invest in training.

It isn’t migrants that have caused a housing crisis; it’s a Tory government that has failed to build homes.

Our party must be a safe and welcoming space for everybody,

Horrid. Then we heard,

And we will ensure that successful innovators have access to the finance necessary to take their ideas to the next level grow their businesses and generate employment.

So as part of our Workplace 2020 review, we will make sure that and our tax and social security arrangements are fit for the 21st century, consulting with self-employed workers and the Federation of Small Businesses.

But these were minor gripes. And our favourite bit?

If the Tories are the party of cuts and short-termism. Labour is the Party of investing for the future.

We will put aside the matter of rifts and feuds. Not our problem. However, it's clear that Mr Corbyn is still work in progress with his public speaking. But this Corbyn conference speech was a distinct improvement on his 2015 efforts. And, because of his re-election, he's got many years ahead of him to really nail it.