Metaphorically speaking there's a wind of change in the Treasury. That much is immediately obvious with the new tenant of 11 Downing Street, Rishi Sunak. Yes, it's fair to say that his immediate predecessors didn't really bother us too much. We noted Sajid Javid's problems with the applause point at the 2019 Conservatives conference in Manchester, but we never featured any of Philip Hammond's speeches. He only ever mustered a cough sweet entrance with the Theresa May conference speech nightmare. But it was George Osborne and stalwarts such as Gordon Brown who fixated their audiences with stormy metaphors, and much more. 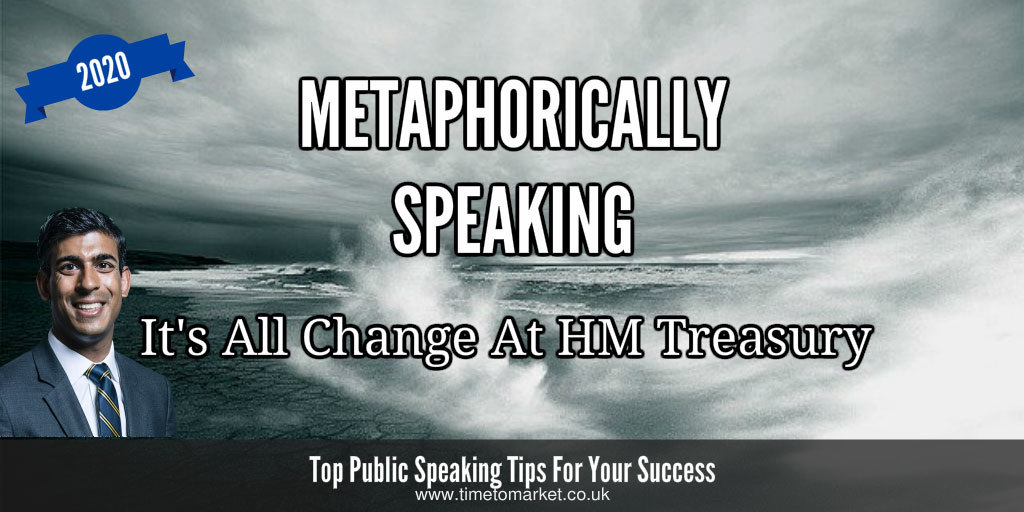 Metaphorically Speaking, It's All Change At The Treasury

But the new Chancellor of the Exchequer exudes managerial profession in his use of language in his first Budget speech. Gone are the descriptive, stormy metaphors of the previous era. And gone too are the mentions of leaking roofs such as:

So this was largely a businesslike Budget speech shorn of its metaphorical traditions. Yes, we heard a lot about,

But, I'm afraid that Parliament is going to have to get used to this. The closest that the Treasury speech came to metaphorically speaking was when it covered the foundations of the economy.

This Budget responds, at scale, to the immediate threat of Coronavirus.

And it reports on an economy whose foundations are strong.

We need to build the infrastructure that will lay the foundations for a new century of prosperity. We need to grab the opportunity to upgrade, to improve, to enhance, to level up.

And, of course we had mention of level up. Yet another phrase that we are going to hear a lot of in the next five years.

If we spotted any speaking connection to the tradition of George Osborne's budget speeches, then it was the listing and partial sentence technique of the new Chancellor.

Our ambition is truly national.

The A46 in the Midlands.

Freeing the traffic north of Newcastle.

But, that was it. So, metaphorically speaking it's all change. And whilst we spotted some hints of a previous incumbent, this is definitely plain speaking, businesslike language.

You can always discover more about using speech metaphors, similes and the like (!) with our regular series of public speaking tips, posts, podcasts and videos. And with more than 100 tips from which to choose, there's something for every occasion. Plus, when you really need to work some magic with your next speech, then please don't hesitate to get in touch about training or coaching.