Speaking at the London HQ of the Co-Op Bank should suit a speaker like Ed Miliband at a time like this. And he didn’t disappoint. Because this Ed Miliband stewardship speech certainly achieved its goals. 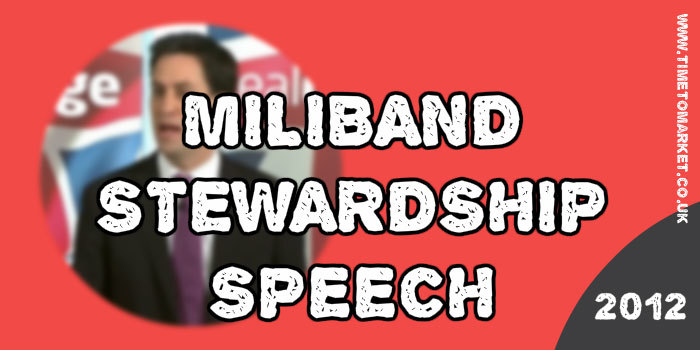 His speech in London yesterday attacked elements of the banking industry with vigour. His speech wasn’t a re-run of last year’s conference speech when he attacked predatory capitalism. Nor was it a return to the theme of responsible capitalism from one of his speeches in January.

His speech at the Co-Op bank HQ introduced the theme of “stewardship banking.” A theme that ran throughout this speech. It’s undoubtedly something of which we’ll hear more.

Stewardship Speech Begins With A Story

Beginning his speech he told a story. It was a neat captivating move that captured all the problems with High Street banking experienced by a swathe of voters. And, of course, haracteristic short sentences carried extra emphasis when he described an old-style bank manager:

Who was in it for the long-term.

Who knew his business.

And who got to know Alan (Henderson).

His speech benefited hugely from the Henderson family banking story. It put the whole issue into context for all his audience.

Rhetorical devices were abundant. His audience heard some classic not this but that statements:

An economy based not on the short-term, fast buck, take what you can.

But on long-termism, patient investment, and responsibility shared by all.

Not an economy based on predatory behaviour.

Not an economy that works just for a powerful, privileged few

But an economy that works for all working people.

It’s a favourite technique of political speakers…and it always works.

Then, he used the same technique when his speech introduced the theme of “stewardship banking”:

With rules that should not just work for one Square Mile, in the City of London.

But work for the other 94,000 other square miles of this country as well.

We want banks to serve the country, not a country that serves its banks.

How do we create such a system?

How do we rebuild Stewardship banking in this country?

So, this proved to be an ebullient stewardship speech from Ed Miliband. Events have a habit of knocking governments and aiding oppositions. Therefore, Mr Miliband’s speeches suggest that he’s benefiting from that right now. And why not?

You can alwayd discover plenty of public speaking tips and techniques with our regular series of posts, podcasts and videos. And, when you are ready for some serious public speaking skills development, please don’t hesitate to get in touch.