Ed Miliband’s speech to the Progress Annual Conference on Saturday 21st May proved a good mix of rhetorical device and style. Not least because this progressive Miliband speech took the theme “People wanted more from us.” And so, this was a phrase that he repeated throughout his speech given in London last week. 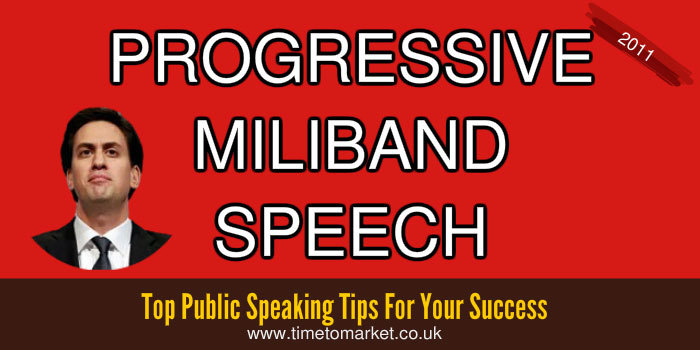 He might not be the prodigy of Tony Blair. But his public speaking style is reminiscent of the former Labour Party Leader and Prime Minister. And, of course, he has a taste for short sentences, just like a Tony Blair speech:

They wanted a voice in tough times.

And he also has a taste for non-sentences:

But to think that is enough is to fail to understand the depth of the loss of trust in us and the scale of change required to win it back.

And, just like Tony Blair, he’s prepared to sacrifice any syntax or grammar rules that might get in the way of a good phrase:

Three moments in the history of our Party when hope defeated fear.
1945.
1964.
1997.
When Labour took office with a sense of national mission
Establishing that national mission.
Persuading people of it.
That is our task.

It’s edgy stuff. Not the stuff of legends. And certainly the first and last dates resonate well. But, 1964? Maybe not. Of course this mangling of grammar is quite distinct to that of a notable Jeremy Corbyn speech. Just think of the indefinite article!

Of course, this progressive Ed Miliband speech included a good mix of favoured rhetorical devices. Thus, we saw the position taker favoured by politicians from all the political parties:

And they have nothing to say.

I say politics can be better than this.

Speaking about the recent election results in the Country he used the rhetorical question:

What about our results in Scotland?

And then he answered that question. The rhetorical question is a bit of a favourite, not least because it allows the speaker to ask questions from the point of view of his electorate.

As a speaker Ed Miliband is prepared to be a bit hip. Here he uses a phrase that became very popular with the dot.com boom in 1999-2001:

Because the public will not return to us until we show we get it.

Other rhetorical devices included the not this , but that device:

This is not the easy path.
But it is the right one.
Because people want more from us.

Conclusion Is Wrapped Up In Progressive Speech

His conclusion managed to combine the prevailing theme for his speech, some good use of repetition and a link to a favoured phrase of Mrs Thatcher:

We the Labour party.
We the country.
We reject the defeatist mantra that “there is no alternative”.
We can create a fair society in which wealth and opportunity go to those who deserve them.
We can build an economy that reflects the best of our values as a country.
We can secure for our children the opportunity to lead more prosperous and fulfilling lives.
We can have the confidence to stand up for the things we really love about Britain.
Because the public want more from us.
The public want more from our politics.

So, a very rousing speech from the Labour Party Leader.

You can discover plenty of public speaking tips with our series of top tips for speakers and presenters. And with more than 100 top tips from which to choose, there’s something for every occasion. Plus, when you need more direct focus on your own skills, then you and your team can always opt for a training course. At your offices, or elsewhere. It’s your choice. So, when the time is right, please don’t hesitate to get in touch.