There’s one almighty furore over the observation that Ireland’s Premier, Enda Kenny, lifted some phrases from a speech given by President Obama on the night of his election victory. The Premier’s controversial lifted speech was delivered in welcome to President Obama at Dublin’s Trinity College. 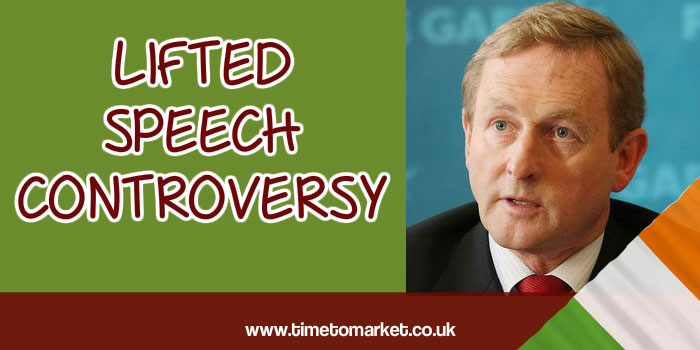 You can borrow and use other people’s material in your speeches. Because, it’s the done thing. It’s what makes the art of speech writing and speech giving the art form that it is. This isn’t literature characterised by copyright or cries of plagiarism.

No. Speech writing and giving positively brims with verbal boisterousness and vitality when it’s done right. It’s full of double meanings and references for the audience to uncover. So, the fact that Premier Kenny’s audience spotted the “lift” bears testament to the effect.

Take some examples. President Obama borrows material consistently from the speeches of Martin Luther King. That’s right and it’s fully appropriate. In his healthcare speech, he did just that. In fact the phrase, “Now is the time,” is borrowed by many public speakers including the UK Premier, David Cameron.

Be Realistic With A Lifted Speech

So, Premier Kenny, well done. A superb performance. Which might also be a good description for this Taoiseach speech from his successor.

You can find better alternatives to a lifted speech with a public speaking skills course from Time to Market. You can train at one of more than 40 public speaking training centres in the UK. Or, as an alternative, you can choose a corporate training course in your own offices. It’s your choice. So, please don’t hesitate to get in touch.