Albertan newspapers were up in arms last week with an apparent case of public speaking plagiarism. Dr. Phillip Baker, Dean of medicine at the University of Alberta gave a stirring Alberta commencement speech for the 2011 graduation class. 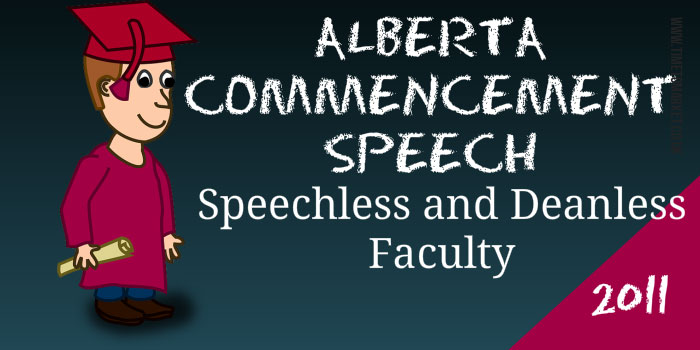 But his student audience noticed something was wrong. His speech bore an uncanny resemblance to a speech given at Stanford University, USA, by Dr. Atul Gawande. That speech was later printed in The New Yorker.

Now I’m pretty relaxed about borrowing or filching ideas and thoughts in speeches. Churchill did it. Dr.King did it. JF Kennedy did it. And so did Reagan. Even President Obama did it with his healthcare speech at George Mason University in 2010. And we don’t complain about them. In fact, we tend to celebrate them. So, their example extends to the vast majority of speech makers today. Few speakers, let alone speech writers give attribution.

Because references, puzzles and clues are their craft…designed for a thinking audience. Not a baying mob.

In fact the rapt attention of many audiences is due to their keenness to spot the work of others or their ideas. Can you spot the nod to William Shakespeare in this piece from Martin Luther King?

The sweltering summer of the Negro’s legitimate discontent will not pass until there is an invigorating autumn of freedom and equality.

It’s there. But quite rightly, there’s no reference to the bard. It’s not needed.

Unfortunately the Dean of Medicine, short of time, seems to have copied someone’s work to meet his public speaking deadline.

And, up against a hysterical media furore, he’s resigned as Dean.

But apparently that’s not enough. Now his detractors want him to quit the University altogether.

He’s not helped of course by the fact that the University of Alberta has a strict policy on plagiarism in exams and course work. And that strict policy that extends to all the student body, and by implication to the staff.

I trust that common sense prevails. This was a commencement speech given by a busy academic. Yes, time-poor he filched material from another speech writer. Undoubtedly he should have committed to more planning, more research and more preparation. But he didn’t.

Now that he’s no longer the Dean he should have more time to offer to the pursuit of academic excellence. He can leave the public speaking to his successor…who might task their executive assistant to be more supportive in the task of academic speech writing.

So, when you want to avoid the example of this Alberta commencement speech or this State Senator’s speech, why not discover our public speaking tips. Or, perhaps, you can turn to Time to Market with a skills refresher. This is a great opportunity to work on, develop or refine a speech. Please don’t hesitate to contact us for more details.