A Governor speech by Mark Carney the new Governor of the Bank of England marks his first public speaking engagement since he took office in the Summer. 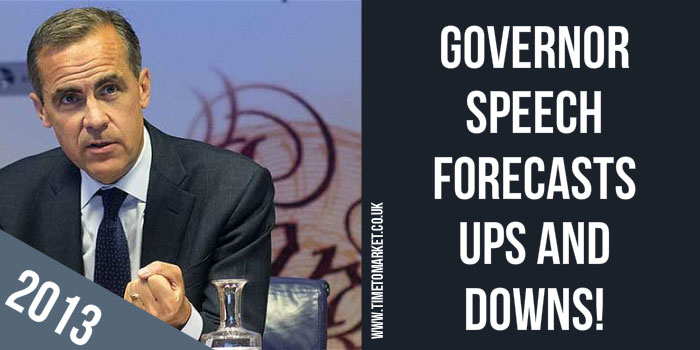 Speaking in Nottingham, in front of an audience of Midlands business people, the Governor’s speech set out the line of his policy direction.

In simple terms the speech made clear that we shouldn’t expect something to go up before something else comes down. That is, interest rates won’t rise until the unemployment rate falls to 7% of the UK workforce. A simple message, simply delivered.

And so simple was the speech’s main purpose that it set everyone second guessing all the other options.

Second guessing the Governor’s intentions is normal behaviour. Mr Carney might be new to the Governor’s job but he knows this. Every syllable, every word and every speech will be dissected for inference and meaning.

That’s the job description. And it can make for very laboured speeches.

His speech on Wednesday was no exception. Delivered in a near monotone this was not the riveting rhetorical stuff that enlightened Washington D.C.  on the anniversary of Martin Luther King’s “Dream” speech.

But was it any more important? No, not at all.

But we’ve become used to hearing financial matters presented in a laborious and wooden style that we believe it must be important. As if their wooden public speaking delivery imparts great importance. Unfortunately it doesn’t and most listeners will be tempted to give such speeches a miss.

But there were positives in Nottingham. Mr Carney does manage to add extra emphasis to key phrases and words in his speech. And the flow of his speech does benefit from some significant pauses. He’s not afraid of the pause. I sense that this is work in progress and we’ll become used to a robust style if not an eloquent style of public speaking.

When you want to be more confident about your public speaking you can always join a PresentPerfectTM public speaking course. Join us at a scheduled course or we can organise a corporate public speaking event for you. You can train in Nottingham, or at one of more than 40 training centres in the UK. And, of course, we can always run a course at your own offices. Please don’t hesitate to call.