You really can’t argue with the passion and poise of the public speaking performance of the Prime Minister, David Cameron, yesterday. The Cameron Syria speech was truly a first rate Commons speech that should have hit all the right buttons in the House and in the country at large. 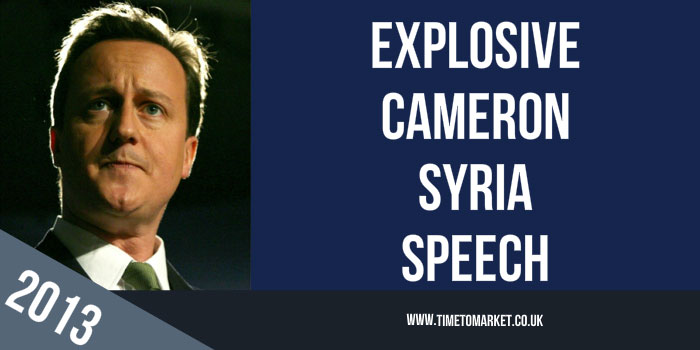 But it didn’t. Buttons weren’t pushed and the Prime Minister got it. Public speaking passion and poise are worthless without a purpose or a vision. And it was the lack of a vision for Syria, the Middle East and Britain’s involvement that characterised the reaction to the Cameron Syria speech. No amount of rhetoric or oratorical flights of fancy could substitute for the singular absence of vision. The Prime Minister tried the rhetoric. He worked the oratory. But the belief was found wanting.

Because, without a vision or purpose his speech was comparable to the delivery of a smooth car salesman. So, good patter. Excellent delivery. And a worthy argument. But, people didn’t believe him.

Many observers have pointed to the historical perspective in the last 24 hours. The fact that British voters don’t believe, yet alone trust, their elected representatives since the Iraq war debacle of 2003. The Prime Minister clearly found that significant, as he sought to woo public opinion.

But the Prime Minister might want to ponder an earlier British public speaking hero of the people, Winston Churchill. Professor Richard Toye, of Exeter University, suggests that the public reaction to Churchill’s wartime speeches was not quite as enthusiastic as we are led to believe.

In his book, The Roar of the Lion, Professor Toye examines how the wartime Prime Minister’s speeches were not universally well-received by often cynical, suspicious audiences. His book considers how those speeches were typically politically expedient interventions. Interventions with purpose and ambition. Because, Churchill wrote them for an audience of voters, friends and allies. And, of course, an audience of enemies abroad.

So, that’s something the current Prime Minister might ponder as he reviews yesterday’s speeches and the lost vote.

You can always organise a public speaking coaching session to help you get ready for your next big speech. You can train in your own offices. Or, alternatively, you can train in one of our training centres. And, with more than 40 venues you can choose from, you are never that far away. Please don’t hesitate to call.