Making The Case For Just Cause

You can expect most speeches to benefit from the passage of time as they take shape, metamorphose and become the finished article. Because that was certainly the case with the David Cameron Europe speech earlier this year. On that occasion his speech was delayed several days. It was even given in an alternative venue in a different country to that originally intended. But that wasn't the case with the President Obama Syria speech to the nation last night. 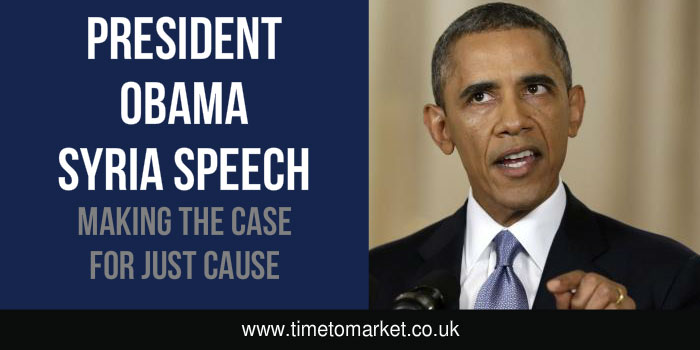 His address was much heralded. He'd said so himself of course at the previous week's meeting of the G20 world leaders in St. Petersburg, Russia. He'd noted his intent to address the nation the following week with a speech on the need for military strikes on Syria.

So far, so good. But whilst the war in Syria appeared to be no different after the last week, matters diplomatic had changed. His speech, set for yesterday, was delivered on time to a national t.v. and online audience as if nothing had changed.

This speech, without one or two passages, could have been given a week ago, before the G20.

His media address didn't manage to make any real fresh argument for military retaliation against the truly obnoxious regime in Damascus. Well, certainly nothing that he hadn't already said. Many speakers might get away with that. But not a President who's addressing the nation and interrupting the t.v. schedules with his speech.

In doing so the President's speech managed to get in the way of most people's evenings…not his intention at all.

The Obama Syria speech was well-given, read from autocue in the White House East Room. Its flow and cadence were faultless and the words themselves were perfect. But they weren't new. It's a given that American Presidents take to the airwaves and interrupt the schedules when they have something new to say or are set to execute some action.

That action wasn't outlined yesterday. His speech had been fatally compromised by other diplomatic activities during the week. In effect he used his speech to tell the American people that Congress would not be voting on war with Syria. That was it. So, a not too dissimilar result to the David Cameron Syria speech in August 2013.

The nub of the speech.It remains to be seen whether action will still be taken…but after this speech, that's got to be highly remote.