We’ve come across speakers who’ve been barred from giving a speech. Typically, there’s no freedom of speech in many American schools. But in New York state there’s a former mayor of Falls City Council, Matteo Anello, who’s determined to sue the Council…because he was prevented from delivering his speech. OK, not so much barred. He was actually forcibly ejected from the Council chamber by a local police officer. He was two minutes into his speech when the Chairman of the Council, Robert Anderson, interrupted his speech. And, he declared Anello “didn’t have the floor” and ordered him to be removed from the Council chamber. 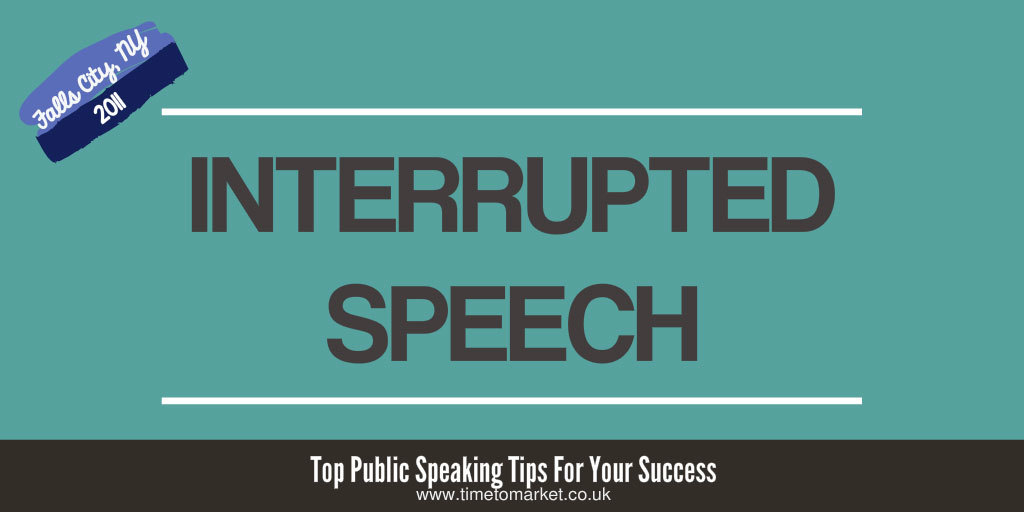 Now we do like to give tips, where possible. Such as, how to handle interruptions during your speech. But a forcible ejection from the auditorium is beyond our imagination. But, as if that wasn’t bad enough, the authorities then charged the plucky Matteo Anello with disorderly conduct and resisting arrest. All on the say so of the Council Chairman, Mr Anderson.

The case has been grinding on for some time…over three years now. But the initiative is probably with Mr Anello. Because a Judge has already thrown out those criminal charges. Good. All because of an interrupted speech.

The latest development involved Mr Anello. He handed over a copy of his speech to the judge and the defendants prior to their next court meeting. His hand-written speech is likely to be compelling evidence and will shed some light on why Mr Anderson had him ejected from the podium three years ago.

Yes, they have finally settled the case. Because this interrupted speech has cost the local  taxpayers a small fortune. But, it now, (November 2016) finally settled. But, as ever it’s the lawyers who really went to town on this case. There has to be a lesson there.

Of course you can always find plenty of public speaking tips with our regular series of tips for speakers and presenters. And, with more than 100 top tips from which to choose, there’s something for every event. Perhaps you want to know how you can manage interruptions in your next speech? Plus, when you are ready to give your own public speaking skills a kickstart, then you can always consider a course. Because a public speaking course is just the ticket to get you ready for your next speech. So, when the time is right, please don’t hesitate to get in touch.