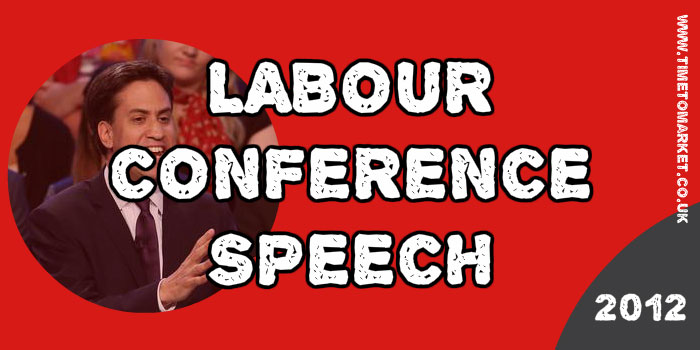 But the disaster is David Cameron’s.

Ed Miliband has done just that with his leader’s speech at the Labour party conference in Manchester.

His speech took the “one nation” theme, so beloved by a large slice of the Tory party since Prime Minister Benjamin Disraeli in the nineteenth century. It’s a theme that has underpinned much of the philosophy of David Cameron and has featured in his speeches with…’we are all in this together’ and the Big Society.

In today’s conference speech the Labour party leader used the “one nation” phrase some 44 times in his speech timed at one hour and five minutes. People say that his speech was some 20 minutes over his expected duration. Was this possibly the effect of numerous ovations from the faithful? Probably. Because Ed Miliband doesn’t really need to know how long his speech should be.

His speech didn’t disappoint. It positively brimmed with rhetorical flourishes. Repetition was clearly a feature. Could it be otherwise with “one nation” repeated 44 times?

But the biggest distinction for this speech was its polish. Because Ed Miliband delivered his speech without a script and without autocue. So, despite the duration, he gave a polished and practised speech. Clearly he had rehearsed. And the results were obvious.

He mentioned both Old Labour and New Labour in this Labour conference speech. And he also mentioned previous leaders…Tony, Gordon and Neil. But he stopped there. Because, this was the new leader’s performance. But without mentioning Blair, much of Ed Miliband’s public speaking style is curiously reminiscent of Tony Blair.

This proved an ambitious speech that’s proved the Labour party leader has a future…one nation or not. And that’s certainly evident with the 2018 John McDonnell conference speech as well.

You can always join us for a public speaking course in Manchester or, indeed any of our 40 training centres. Also, when you need to give your public speaking skills a real boost, you can consider some coaching. That’s because a half-day coaching session will give you all the skills and confidence you need for your next conference speech. Please don’t hesitate to get in touch when the time is right.