A Challenge For Party Conference Organisers

A President Bill Clinton speech brought down the house at the Democratic Party National Convention (DNC 2012) in Charlotte, North Carolina. But his speech also  set a very high bar for all the other speakers to follow. And, of course it also posed a problem for conference organisers everywhere. 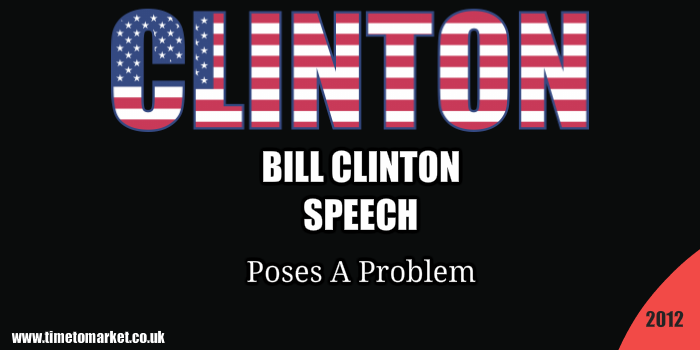 At the DNC 2012 those other speakers included the President, Barack Obama and the Vice-President, Joe Biden.

His speech proved a master class for political speakers everywhere. Since it just oozed class and style. Because the Clinton speech was simply characterised by expert timing and neat rhetorical flourishes. This really was some nomination speech:

We’re here to nominate a president, and I’ve got one in mind.

I want to nominate a man whose own life has known its fair share of adversity and uncertainty. A man who ran for president to change the course of an already weak economy and then just six weeks before the election, saw it suffer the biggest collapse since the Great Depression. A man who stopped the slide into depression and put us on the long road to recovery, knowing all the while that no matter how many jobs were created and saved, there were still millions more waiting, trying to feed their children and keep their hopes alive

I want to nominate a man cool on the outside but burning for America on the inside. A man who believes we can build a new American Dream economy driven by innovation and creativity, education and cooperation. A man who had the good sense to marry Michelle Obama.

Has The Clinton Speech Set A Trend?

But will an introduction by a former Head of State prove catching? Will other leaders look to their predecessors to introduce them or share the same platform? So, that’s the problem.

In Britain it’s not quite crystal clear. Yes, Britain’s Nick Clegg the leader of the Liberal Democrats referred to a former leader, Paddy Ashdown, in his 2011 conference speech. It’s Mr Ashdown who’s charged with leading the party’s next election strategy. A tough job for the ex-Marine.

But will the Labour party’s Ed Miliband follow suit and involve a former leader in the party conference in Manchester this week? The omens aren’t good. (Actually, we were wrong! Because Gordon Brown did give a 2012 Manchester conference speech.)

One unionist leader has even called for a purge of Blairites this week, so we can’t really expect Tony Blair to share the podium let alone give a speech of support.

And the chances of Gordon Brown being mentioned, let alone giving a speech, are fanciful.

And the conservatives? Yes, former leader William Hague will be ready with a speech or two. But there’s no realistic opening for nominating  speeches from the likes of John Major or Michael Howard.

Past Events Prove Difficult For Speakers

The challenge is the association with past events. Past problems.

You could argue the same for former President Bill Clinton. But there’s more to Bill Clinton than the past. He still represents the future. Being married to Hilary can’t be overlooked. But slimmer and fitter than he was as President he still looks like he has a lot to give…speeches included.

You can read a whole series of public speaking tips with Time to Market. Each post, podcast and video is packed with the public speaking techniques you need to be successful. And, when you want to really give your public speaking skills a workout, then you can always consider skills training. A course or coaching session could be just the tonic. So, when the time is right, please don’t hesitate to get in touch.