Michael Gove Speech Has A Moral Purpose For School Reform

This Michael Gove speech at the Annual Conference of the National College for School Leadership in Birmingham proved lengthy. He contained the speech to some 35 minutes by rattling along at a great pace. Not for him the pauses so characteristic of his Leader or, indeed, the Leader of the Opposition. 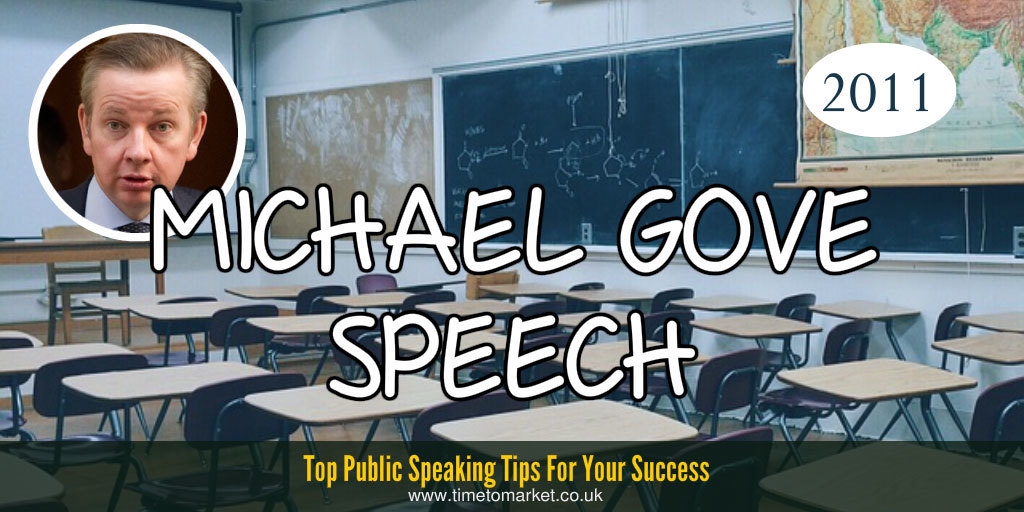 This was cerebral stuff. Quality education material from the Education Secretary. At speed.

Michael Gove Speech Has Too Much To Say

In truth he probably had too much to say in this speech. The speech set out his Department’s achievements and mapped out their future direction. There was plenty of detail, and it was this detail that absorbed the words.

He tried to build in some structure to his speech. So he referenced the common features of high-performing education systems. This was a complex route, and I’m afraid that he lost me. Without subsequent structure signals, in the body of the speech, we found it hard to gauge how much further this speech had to go. Because audiences like to know!

With his remit for schools the Minister is not afraid to tell tales. This speech is full of stories that bring the school system into sharp focus:

Just last week I was talking to one young man at the secondary school nearest to my home, Burlington Danes.

People like Dana Ross-Wawrzynski at Altrincham Grammar Schools for Girls…

Many of his stories in the speech are references. And so he uses these references to tie his speech into the achievements of the school system. A good move for any speaker.

This Michael Gove speech, probably written by a civil servant speech writer does have its cringe moments. Moments where government speak takes over:

Even as I celebrate the growth of autonomy

We need to be richer.

Exactly. But this wasn’t about wealth creation.

My favourite moment? The moment that we all realised that Michael Gove was probably no slouch when he was at school:

Introducing the next generation to the best that has been thought and written is a moral enterprise of which we can all be proud. Giving every child an equal share in the inheritance of achievement which great minds have passed on to us is a great progressive cause. Shakespeare’s dramas, Milton’s verse, Newton’s breakthroughs, Curie’s discoveries, Leibniz’s genius, Turing’s innovation, Beethoven’s music, Turner’s painting, Macmillan’s choreography, Zuckerberg’s brilliance–all the rich achievements of human ingenuity belong to every child–and it should be our enduring mission to spread that inheritance as widely as possible.

Alan Johnson wouldn’t have got away with that. Let alone Estelle Morris.

So, a scholarly and worthy Michael Gove speech that could benefit from more structure.